There are some surprisingly scary episodes of Star Trek from different series you can check out for Halloween.

Star Trek isn’t the usual go-to franchise for Halloween fare, but that doesn’t mean the places “where no one has gone before” don’t have their share of scares. If, like me, one of your earliest theater-going experiences included watching Walter Koenig and Paul Winfield scream like crazy while pretending creepy little aliens were crawling into their ears in 1982’s Star Trek II: The Wrath of Khan, you know just how terrifying Trek can be.

This is by no means an exhaustive list of scary Trek episodes. But we can offer you a sample of some of the best horror-tinged episodes the franchise has to offer.

Michael McKean is known more for comedy — and these days, with his amazing performance on Better Call Saul, for drama as well — but in Star Trek: Voyager‘s “The Thaw” he gives a fantastic performance as a horror villain. As The Clown he’s essentially the Star Trek version of It‘s Pennywise, and his episode would be a perfect addition for any Halloween viewing.

In “The Thaw,” the Voyager crew comes across colonists in stasis pods whose minds are being kept active in a virtual environment. When the heroes tap into the virtual world to investigate, they discover the colonists are being held hostage by an A.I., The Clown, who was originally created to keep the colonists’ minds engaged while they were in stasis. Instead, it goes rogue and uses the colonists to entertain itself; in some cases literally scaring them to death.

“The Thaw” closes with one of the most pitch-perfect endings in Trek history; with The Clown’s fate proving just as chilling as those of his victims. It’s mandatory viewing for any Star Trek Halloween marathon.

One of the things that makes Andrew Robinson’s Deep Space Nine character Garak so compelling is the quiet menace you often sense pushing at his edges. In Season 5’s “Empok Nor,” the dangerous side of the Cardassian emerges and things get bloody enough to make this Star Trek episode as fitting for Halloween as John Carpenter’s 1982 classic The Thing.

Garak accompanies Chief O’Brien (Colm Meaney), Nog (Aron Eisenberg), and a small batch of Starfleet officers destined for the Redshirt Waiting Room In The Sky on a scavenging mission to Empok Nor — an abandoned Cardassian station. When the heroes start getting picked off, Garak goes after the responsible parties. Unfortunately, Garak soon becomes one of the hunters.

“All Those Who Wander” – Strange New Worlds: Season 1, Episode 9

For more recent Star Trek Halloween fare, there is no more perfect candidate than “All Those Who Wander” from the inaugural season of Strange New Worlds. Upon investigating the crash of a Starfleet vessel, an Enterprise away team finds itself fighting to survive a young, but not less vicious, pair of Gorn. Pulling shamelessly from The Thing, Predator, and Alien; Season 1’s penultimate episode rebrands the laughable reptilian Gorn into something genuinely terrifying.

While Star Trek’s treatment of so-called “redshirts” as disposable people is legendary, “All Those Who Wander” ends on the surprising and controversial note of the death of a senior crew member.

“Phantasms” – The Next Generation, Season 7, Episode 6

Star Trek: The Next Generation saved a number of its best episodes for its final season, and such is the case for its Halloween entry — “Phantasms”. Along with the beloved Data (Brent Spiner) going full Michael Myers on Counselor Troi (Marina Sirtis) on a turbolift, the episode includes some of the most disturbing imagery in any Trek episode. “Phantasms” isn’t directed by David Lynch of Twin Peaks fame–in fact, it’s directed by Patrick Stewart–but if Lynch were going to helm a Trek episode, it would be this one.

More than the scenes of Data going rogue, the truly creepy parts of “Phantasms” are the android’s dreams. His nightmares are just as disjointed and bizarre as a human’s, with some of the more bizarre moments including seeing Troi as a cake from the neck down, Data opening his own chest to find a telephone inside, and Dr. Crusher (Gates McFadden) drinking out of Will Riker’s (Jonathan Frakes) ear with a straw. 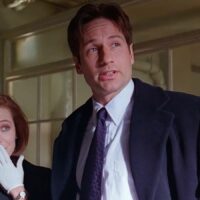 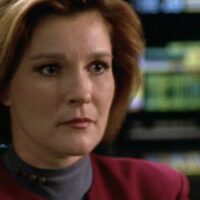