A season finale should leave audiences wanting more. It should also pull together the theme of a show and hit audiences in a way that reminds them why they like it and what the story’s about, at its heart. That’s especially important for a franchise like Star Trek, where emotional ties are high after all these years. So what’s a great way for a comedic series about those working on the lower decks to pull on the heartstrings? The folks behind Lower Decks decided the best strategy was to bring back an original and little-known character that showed audiences what it was really like working on the lower decks for Starfleet. For those who’ve seen The Next Generation’s episode Q Who a few times, the Sonya Gomez reference may have a rung a bell in the Star Trek: Lower Decks season two finale.

In the Lower Decks season finale, Sonya Gomez is introduced as the Starfleet captain of a ship called USS Archimedes. She’s introduced as an old friend of Captain Freeman’s and it’s said that the USS Cerritos will be handling a joint mission with Captain Sonya Gomez. She’s immediately introduced in First First Contact as someone who is kind and who likely has a history as working on the lower decks in her own past. This is established when an ensign trips and falls on the bridge early on in the episode. Captain Sonya Gomez helps them up and says, “Don’t worry, I’ve done way worse, in front of much more intimidating captains.”

Yes, she did, and audiences for Star Trek: The Next Generation saw her do it. Sonya Gomez is voiced by actress Lycia Naff in First First Contact, the season two finale of Lower Decks. Back in 1989, we saw the actress play Sonya Gomez in live-action. She was an ensign then herself. Now, 16 years later (in the Star Trek Universe), that ensign from TNG is a captain. Here she is now, as the captain of the USS Archimedes.

But when we first saw her in Q Who, she wore yellow. She was an ensign and her uniform was stained with hot chocolate. The season two episode is often rewatched by fans because it’s the first episode with the Borg, plus, it has Q, which makes any episode a little more popular. A small and comedic part of the episode is Sonya Gomez, an ensign who is seen talking to Geordi with a cup of hot chocolate in her hand. She seems a little hyper and he talks her down and suggests keeping the hot chocolate far away from his controls. She then bumps into Captain Picard in the hallway, spilling hot chocolate all over him and herself.

The look on Sonya Gomez’s face is pretty familiar to anyone who has worked a job with stories more like those of the lower decks on Star Trek. The ensign is having a day.

Sonya Gomez only appeared in one other episode of Star Trek: The Next Generation (Samaritan Snare), so she isn’t often remembered. However, Lower Decks has now reminded audiences that she went on to have her own life and career in the Star Trek Universe and that it brought her all the way to the rank of Captain.

Speaking of, the episode that brought back Sonya Gomez also introduced her ship. Anytime a new ship is introduced in Star Trek, there are questions. The writer of the episode has let fans know that the USS Archimedes is an Obena class ship. You can see what he has to say about it below. 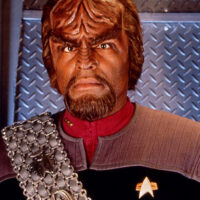 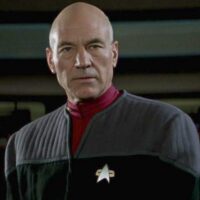 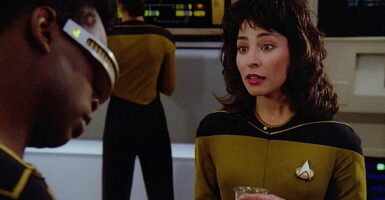 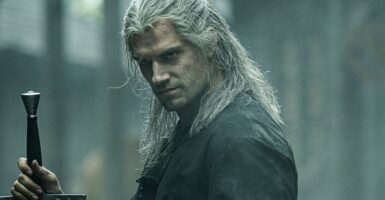