It looks like the folks at She-Hulk: Attorney at Law wanted to use Marvel's best character as part of the series but were told no

With She-Hulk: Attorney At Law just a week or so away from releasing on Disney+, there’s considerable excitement about what this series will hold for the character and the greater Marvel Cinematic Universe. Some odd CGI choices aside, the She-Hulk character, where she lives, who she’s related to, and her powers sit at an interesting nexus point for the studio. It’s why we will see a bunch of different MCU characters show up at some point or another on the show. But according to the showrunner, She-Hulk wasn’t allowed to use a specific hero at all in the series and it’s interesting to think about what might have been here.

In an interview at The Direct with She-Hulk head writer and creator Jessica Gao discussed some of the story choices they had to make for the series. This included which Marvel characters they could and could not use in the story. Seeing as how this is set in New York City, we know there are more than a few MCU folks who make the Big Apple their hero home. And there’s going to be an interweaving of some other folks who are from this neck of the proverbial woods. But Gao was considerably bummed to learn that one character they desperately wanted in the story was a no-go basically from the stop. Check out what she had to say about using Spider-Man and why they wanted at least a Tom Holland appearance in She-Hulk: Attorney at Law:

“…there were a lot of characters that were from the comics that we couldn’t use (in She-Hulk) either because of a rights issue, or there were a few times where it was because Marvel… had other plans…the one MCU character that really bummed out a lot of the writers in our room that we couldn’t use was Spider-Man and anyone involved around– like in the Spider-Man universe. Because we had so many Spider-Man fans in the room…”

On this front, we are definitely with Gao when it comes to who we would have liked to see in She-Hulk: Attorney at Law. Considering New York City is essentially Peter Parker’s town, having him get in some more legal trouble, and needing to call upon Jessica Walters for some lawyerly help would have definitely played. Heck, we already saw this play out once in Spider-Man: No Way Home. It was there that Holland’s Parker needed the assistance of Charlie Cox’s Matt Murdock. While Murdock didn’t go full Daredevil in that one, he at least flashed some of the power by catching a backhanded brick coming through the window.

And to tie that together, Charlie Cox is going to appear in She-Hulk: Attorney at Law. How much a part of the story he takes part in is anyone’s guess right now, but he’s a lawyer (check) and a superhero in NYC (check) there stands to reason he’s part of at least one arc, maybe more. We’re also going to see Mark Ruffalo as Bruce Banner/ Hulk, Benedict Wong’s Wong, and Tim Roth will be returning as Abomination. There are plans for a number of other Marvel characters to make appearances as well.

Of course, not getting Tom Holland as Peter Parker/ Spider-Man in She-Hulk isn’t a huge surprise here. For starters, Sony still has their hands on that character and they’ve got control of the Spider-Man Universe of characters as well. So from a rights perspective (which Gao admits), it was going to be tough. But it also makes sense that Marvel wouldn’t want to go all the way there with Parker in this story either considering what we just came off of with No Way Home. That character needs some time away for sure. We’ll see how the rest of it plays out on August 18th when the first episode of She-Hulk: Attorney at Law hits Disney+. 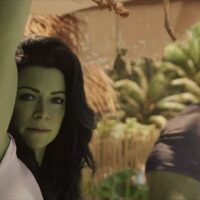