Michelle Yeoh stars in The Witcher: Blood Origin, which has dropped a wild first trailer.

Netflix is banking on The Witcher franchise by expanding on the lore and backstory of the fantasy world that exists in the series, as Michelle Yeoh is set to lead The Witcher: Blood Origin. This new expanded Witcher title will focus more on fantastical elements of the franchise, as shown in the above trailer. While the first look is only a minute in length, we get our first quick look at the many characters that will be introduced in this new series.

Michelle Yeoh leads the way in The Witcher: Blood Origin, which is set in the world of elves, and follows the world some 1,200 years before Geralt, Ciri, and Yennefer are engaged in their own story. This new series will also detail what happens when the first prototype Witcher is created, and the corresponding issues of creating such a powerful being. The series will also explain the Conjunction of the Sphere event, where monsters, men, and elves clashed all together with one another.

There is no telling what the response for Michelle Yeoh and The Witcher: Blood Origin will be, but it is something removed from the Henry Cavill-led series. While many fans are patiently waiting to see The Witcher Season 3 premiere on the streaming platform, the season will also be a reminder that Cavill is taking his exit from the franchise. Cavill has signed on to have a more expanded role as Superman in this new DC plan, he has since passed his role to Liam Hemsworth.

Liam Hemsworth is certainly no slouch of an actor, but he is certainly not Henry Cavill, who has been spectacular as Geralt of Rivia. Thankfully, fans of the books and video games can now see a new dive into this Witcher world as Michelle Yeoh will bring her own spectacular talents to The Witcher: Blood Origin. Yeoh is coming off a hugely successful starring role in Everything Everywhere All at Once which has seemingly reinvigorated her career.

Joining Michelle Yeoh in The Witcher: Blood Origin are Jacob Collins-Levy, Sophia Brown, and Laurence O’Fuarain. The new series is bringing in more lesser-known actors into the world of the Witcher, but with Yeoh at the helm, it looks as though the series is going to be another great run for Netflix. However, this new Witcher-based series is not going to be anywhere near as long as The Witcher has been.

Michelle Yeoh and The Witcher: Blood Origin is set to be a four-part mini-series, though we are not sure if the series is not going to be given a second season. We would imagine that it might just be a single-season affair considering that it will be a mini-series. However, there is plenty of lore in the world of The Witcher to explore, so it may be more than the four episodes that are being produced.

Michelle Yeoh stars in The Witcher: Blood Origin, which is set to debut on Netflix on December 25th. After we all open Christmas gifts, we can all sit around the fire and watch a fantastical world full of elves and war. 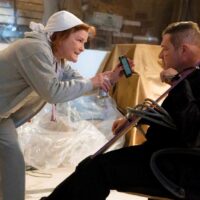