An Over-The-Top Sam Jackson Movie Is Now On Netflix

For filmmakers, shark movies are, for the most part, big sellers. Especially the ones that play over summer vacation, when so many flock to the beach. The fear of the unknown can be a tremendous draw. Now, combine one of the world’s most popular actors in Sam Jackson alongside a shark or two and you’ve got an instant recipe for success.

Deep Blue Sea has swum its way to Netflix and stars Sam Jackson as the big bad corporate executive Russell Franklin. The film sees him co-starring with Thomas Jane as shark wrangler Carter Blake, Saffron Burrows as Dr. Susan McAlester, and Stellan Skarsgård as Dr. Jim Whitlock. The film actually boasts a great supporting cast as well that includes Jacqueline McKenzie, Michael Rapaport, and LL Cool J. But seeing as this is a shark movie, not all players will make it to the end as they become shark food.

The Sam Jackson shark film begins menacingly enough as two young couples enjoy the night on a catamaran in the ocean. Their fun turns to terror as they first hear bumping below deck, then the terror increases as a shark breaks through the bottom of the boat, sending all four into the ocean.

The shark, now with food in sight, is about to clamp down on one of the nubile young ladies when it is shot with a tranquilizer dart. Unphased, the shark continues its approach, until it is shot again. Carter Blake to the rescue.

Sam Jackson’s Russel Franklin then makes his appearance as Dr. McAlester pleads her case to be allowed to continue her research. She is, at first, turned down, but eventually wins over Franklin. This research entails using mako shark brains to help re-activate certain dormant human brain cells as a cure for patients with Alzheimer’s disease. Given only 48 hours to show results and now accompanied by Franklin, Dr. McAlester heads back to her research facility located in the middle of the ocean. There, Franklin is introduced to Carter and the rest of the staff. As most of those working at the facility leave for the weekend, the few remaining have a looming storm on the horizon.

The facility is now being run by a skeleton crew. Dr. McAlester and Whitlock show Franklin (Sam Jackson) what he is there to see – their research is working. By removing the protein complex from the facility’s largest shark, a cure for Alzheimer’s is close at hand. That is until the largest shark decides to snack on Dr. Whitlock’s entire right arm.

Panic ensues as the small crew tries to get help for Whitlock. As he is being lifted out, the cable jams, sending the stretchered Whitlock into the shark pen. The large shark grabs the stretcher, pulling the helicopter into the facilities tower, killing all inside and causing a huge explosion. The large shark then takes the stretcher, now underwater, and rams it into the facility’s main window, causing the laboratory to flood. Just how is this shark, as well as two others, able to do this?

Dr. McAlester finally confesses. She and Dr. Whitlock genetically engineered the three sharks to increase their brain size. The normal shark’s brains weren’t large enough for the doctors to harvest enough of its protein complex, so they decided to make the brains larger, and unwittingly created super smart and highly aggressive sharks. Now the remaining crew must figure a way to save themselves. With all communications destroyed, help is not going to arrive. The arriving storm is no help either.

Shark bait is what most end up as, because naturally, the crew begins to fall prey to the genetically engineered sharks. As for Sam Jackson, his rousing monologue concerning group togetherness is an amazing piece of Samuel L. history, that comes with an ending befitting the man.

Who survives and who doesn’t is what you watch Deep Blue Sea for. This over-the-top Sam Jackson movie is gruesome, it’s gory, and it delivers everything one would want to see in a shark thriller.

Director Renny Harlin was given $60 million for his shark feast written by a trio of scribes, Duncan Kennedy, Donna Powers, and Wayne Powers. While Harlin directed a couple of blockbusters such as A Nightmare on Elm Street 4: The Dream Master, Die Hard 2, and Cliffhanger, he was coming off two recent bombs with Cutthroat Island and The Long Kiss Goodnight, so Warner Bros. was taking a bit of a chance by hiring Harlin. He rewarded Warner’s faith by bringing in $165 million at the box office.

It’s hard to say if Sam Jackson made the right decision to star in Deep Blue Sea or not. His name definitely brought clout as he already had starred in movies such as Pulp Fiction, Die Hard with a Vengeance, A Time to Kill, The Negotiator, and Star Wars: Episode I – The Phantom Menace. The genre seems like a nice fit as he’d return to it years later with Snakes on a Plane.

Since fighting both sharks and snakes, Sam Jackson has gone on to bigger things, mainly his affiliation with Marvel. His introduction as Nick Fury came in the 2008 Marvel film Iron Man and since then, Jackson has starred in 11 Marvel projects with another two on the horizon.

Not only has Marvel been Sam Jackson’s calling card, but so has his relationship with Quentin Tarantino. In total, Jackson and Tarantino have collaborated on six successful Tarantino films.

2021 has already been a big year for Sam Jackson. He first starred in the Saw spin-off Spiral opposite Chris Rock and then was seen reprising his role as Darius Kincaid in the action-comedy The Hitman’s Wife’s Bodyguard along with Ryan Reynolds and Salma Hayek.

Sam Jackson next will continue his relationship with Marvel as he is first voicing Nick Fury for the animated series What If…? and then he will star in the Disney+ series, Secret Invasion, again playing Nick Fury. For now, go watch Samuel L. Jackson say Samuel L. Jackson things in Deep Blue Sea on Netflix. You won’t be disappointed. 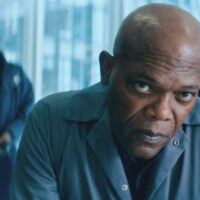