Marvel fans are dying to have the Russo Brothers direct Secret Wars for Marvel, and the directors finally opened up about it.

The Russo Brothers have been incredibly busy lately. Between giving tours of their offices and dropping their highly anticipated spy thriller, The Gray Man, the two are ready for a break – or maybe their next project. Whatever the case may be, that next vehicle will certainly not be a movie centered on Marvel’s Secret Wars. While it’s been wished and rumored by Marvel fans everywhere, the Russos shot down the whispers during a recent chat with Josh Horowitz.

The rumors circulating stated that the directorial duo would not only be returning to the Marvel Universe, but that they’d also be dropping the knowledge at this weekend’s San Diego Comic-Con that they will be standing at the helm of Secret Wars. During their interview with Horowitz, the Russo Brothers said this couldn’t be farther from the truth. Not only did the two say they wouldn’t be making any sort of announcement of the like, but they also revealed that they won’t be appearing at the giant event. They did mention that they’d be happy to put their names behind another Marvel flick at some point but spoke to their incredibly packed schedules as being a reason that these chats have never taken place.

On the other hand, they also mentioned that Secret Wars was their favorite series growing up, so is it totally off the table? The Russo Brothers say yes, but we’re not so sure. What we are sure of is that some big announcements are on the way. Kevin Feige has said that he’s preparing to reveal the next few phases of the MCU, but what he’s got up his sleeve, no one knows for sure. With the multiverse being such a hot topic in recent Marvel films, a lot of fans are thinking that the latest iteration of Secret Wars, penned by Jonathan Hickman in 2015, is going to come into play. It would see a slew of our favorite storylines and characters colliding in what would be the perfect wrap up to phase four of the MCU.

Meanwhile, the Russo Brothers have plenty of other things to think about. With their newest production, The Gray Man, out in select theaters and preparing for its streaming premiere this Friday on Netflix, the sibling team is surely getting ready to take in the reviews of their adaptation of the beloved spy-based novel. The star-studded feature centers around an ex-CIA spy named Court Gentry (Ryan Gosling) who discovers some top secret information that threatens to take down the entire agency. Now, he’s a man on the run and is being hunted by his ex-coworker and all-around insane human being, Lloyd Hansen (Chris Evans). Along with the help of some highly trained assassins, Lloyd is prepared to stop at nothing to destroy Court before he can share his newly found information with the world. The feature also stars Ana de Armas, Regé Jean-Page, Jessica Henwick, and Dhanush.

While they may not be backing any upcoming Marvel projects, all hope is not lost for the Russo Brothers to return to the hit-making studio. With phase four ticking right along, we wouldn’t be incredibly surprised if the duo was back behind the cameras before we know it – just maybe not on Secret Wars. 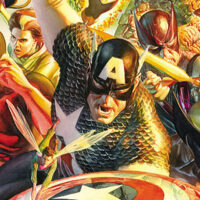