Rosario Dawson Next To Be Cancelled, Fears Lucasfilm

Gossip writer Daniel Richtman brings word that Lucasfilm warned Rosario Dawson that she may go the way of Gina Carano if she isn’t careful. The news comes a month after Disney fired Carano for her inflammatory social media posts. While Dawson isn’t on blast for the same reasons, the accusations leveled against her are far more serious. Please keep in mind that this is mere gossip at this point and should be taken as such.

For those who may find themselves blindsided by this news, let’s backtrack a bit. In October 2019, a trans man employed by Rosario Dawson’s family, Dedrek Finley, took the Dawsons to court for misgendering, physical assault, verbal abuse, and discrimination. In August 2020, Finley dropped 18 of the 20 accusations. Among the dropped claims were the discrimination and misgendering accusations.

None of this has ever been proven, so again, please take this as a mere rumor until we have further confirmation. Richtman seems well-connected and his scoops have proven accurate before, but remember that he is hearing all of this through a grapevine just like we are. Regardless, it is disheartening to see the actress behind one of the Star Wars franchise’s most important characters catch so much flack. Hopefully, the accusations aren’t true. If they are, though, then Lucasfilm would be doing the right thing by letting her go. And it makes sense why they’d urge her to tread lightly.

If Rosario Dawson does end up being fired, or “canceled,” it would derail Lucasfilm’s ambitious plans for a live-action Ahsoka spin-off starring Dawson and, presumably, the elusive Grand Admiral Thrawn. That would be a massive blow to the Star Wars universe, one that would present some major problems for Kathleen Kennedy, Jon Favreau, and the fellow big wigs at Disney and Lucasfilm. It’s likely that if talks to fire Dawson are indeed happening, then they are doing all they can to communicate their concerns clearly and not surprise her with bad news. Hopefully, it does not come to that.

Accusations aside, Dawson did a fantastic job bringing Ahsoka Tano to life. She put her own spin on the character while still managing to honor Ashley Eckstein’s years-long tenure voicing the popular Jedi. It was impressive and it would be such a shame to see her go, but it is also important to trust that Disney and Lucasfilm will make the right call on this one. They fired Gina Carano after months of the actress disparaging marginalized groups and spreading false claims of election fraud. It was a long time coming.

Rosario Dawson made her debut as the live-action version of exiled Jedi Ahsoka Tano in the second season of The Mandalorian, making such an impression that Lucasfilm promptly announced that Ahsoka spin-off discussed earlier. Her solo show will lead up to a crossover event that is said to bring together every show set in The Mandalorian‘s timeline in a brilliant, unexpected way.

It is unclear how all of this will shake out if it shakes out at all. Hopefully, though, it is resolved in a way that honors both sides and allows both parties to move forward comfortably and confidently. Rosario Dawson has definitely elevated the Star Wars universe 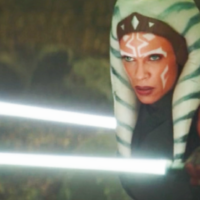