Film star Rita Wilson has been revealed to be cast in an upcoming episode of the hit show Yellowstone: 1883. Per Variety, Wilson will play Carolyn, a storekeeper who bonds with series star Faith Hill over some whiskey punch. That is indeed an extremely Western-y sounding role, fitting for the prequel series from Taylor Sheridan. The announcement of Wilson’s role on the Paramount Plus show follows the recent appearance of her husband, two time Academy Award winner Tom Hanks, on the series. 1883 takes place as members of Yellowstone’s Dutton family make the perilous journey from Texas to Montana to establish the ranch from which their descendants will wield power.

So what is this prequel series that Rita Wilson is joining all about? Yellowstone: 1883 is the most recent television series from Taylor Sheridan. He first came to prominence as an actor on shows like Veronica Mars and Sons of Anarchy. After some hard realizations about the economics of Hollywood, Sheridan pivoted into behind-the-scenes work. His first screenplay, Sicario, was directed by Dune filmmaker Denis Villeneuve and competed for the Palme d’Or at the Cannes Film Festival. His next, Hell or High Water, was nominated by the Academy Awards for Best Original Screenplay. In 2018, he created Yellowstone, a brutally soapy drama starring Kevin Costner on Paramount Plus. By its recent fourth season, Yellowstone has become one of the most popular shows in the world. It spun off 1883 as a prequel show. It currently stars Tim McGraw, his real-life spouse Faith Hill and the legendarily mustached Sam Elliott. And so we come to Rita Wilson.

Rita Wilson first began appearing in sitcoms like The Brady Bunch in the 1970s, and moved into films short after. She appeared with future husband Tom Hanks in the 1980s comedy Volunteers, and then again in 1990 in Brian De Palma’s notorious bomb The Bonfire of the Vanities. She has also worked numerous roles in theater, including a 2006 revival of Chicago. But like Taylor Sheridan, one of her greatest successes lies behind the scenes. Rita Wilson was instrumental in bringing the stage version of Nia Vardalos’ play My Big Fat Greek Wedding to screens in the early 2000s. That film became a sleeper hit, and remains the highest-grossing romantic comedy film of all time.

It may turn out that Rita Wilson’s appearance on Yellowstone: 1883 is a one-off. Apparently, she and Tom Hanks have been close personal friends with Tim McGraw and Faith Hill for decades. Their roles on the show were personal favors, with Hanks apparently showing up to set following a single phone call. But it probably does not take a lot of prompting for even some of the most powerful people in Hollywood to show up to one of the most popular shows out there. As it is, there is already another spinoff of Yellowstone in the works, entitled 6666. Maybe for that one, Taylor Sheridan can get a cameo from Colin Hanks. Or from Chet Hanx. If all goes well, eventually every member of the Hanks-Wilson family will have appeared in one of Sheridan’s grim, bloody Westerns. At least, here’s hoping! 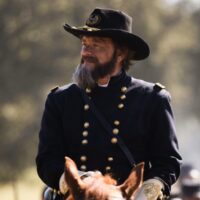 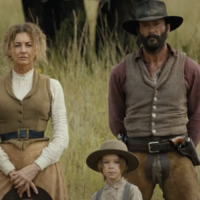