Some of you may remember the actor. Some of you may even know his story. But for those of you who don’t, Rick Moranis is an interesting tale. He was a hot actor, not in terms of physicality or looks; perhaps “in demand” is more what we are going for here. He wasn’t necessarily a lead actor, though he did lead a few movies and did quite well with those. He was a busy actor and then suddenly, poof! Rick Moranis was gone.

He’s back! And we have Ryan Reynolds to thank for it. Reynolds is a huge Rick Moranis fan (because of course he is) and he managed to get the actor to appear on screen for the first time in a long time, for a Mint Mobile ad which is mostly just about how great Rick Moranis is.

Here’s the return of Rick…

If Rick Moranis gets a Mint Mobile phone, then I’ll be honest, I want one too.

Read on to find out why it took an act of Ryan Reynolds to bring Rick Moranis back into the spotlight.

Rick Moranis came to prominence in the Canadian sketch comedy series SCTV. There were two versions of the series, the first running from 1976 through 1981. Moranis came aboard this version in 1980, appearing in 26 episodes. The second version was retitled SCTV Network and ran for two seasons with Moranis appearing in 27 episodes.

For those of you unfamiliar with SCTV, it was at first called a Saturday Night Live ripoff, but as time went on, it truly became its own thing. It introduced the world to legendary comedians such as John Candy, Martin Short, Harold Ramis, Eugene Levy, Andrea Martin, Catherine O’Hara, Joe Flaherty, Dave Thomas, and yes, Rick Moranis.

Thomas and Moranis truly made their names from the two characters they created, Bob and Doug McKenzie, the McKenzie Brothers from their hit bit, The Great White North. They played two beer-swilling, tuque-wearing, back-bacon eating, hose-heads who spoke on various Canadian/American topics. It was classic comedy, pretty much made up on the spot. Per Rick Moranis, “We went on the stage with no preparation and did 15 [episodes]. Two of them were lousy, in three we cracked up and fell apart, so maybe six were keepers.”

A sample of their antics plays below, this one has a Christmas theme.

Rick Moranis and Thomas turned the popularity of the McKenzie Brothers into a feature film, the classic Strange Brew. Creating a 90-minute movie out of a 2-minute skit is no easy task but Moranis and Thomas were up to the task as they both co-wrote and directed the movie. They even pulled in heavyweight actor Max von Sydow (The Exorcist, The Greatest Story Ever Told) to be the villain.

RICK MORANIS IN THE 80s

Next up for Moranis was Ghostbusters. In it, he played the meek geek, Louis Tully, who eventually turns Keymaster having been possessed by the demon Vinz Clortho. His job, to open the gate that will bring Gozer The Gozerian into our world. Moranis would reprise his role as Tully in the second Ghostbusters movie.

The decade of the 80s was a good one for Rick Moranis. Not only did he play Tully in the Ghostbusters movies, but he was also seen in comedy hits like Brewster’s Millions, Club Paradise, and Parenthood. He portrayed Dark Helmet in the Star Wars parody, Mel Brooks’ Spaceballs. Moranis also took on the lead role as Seymour Krelborn in the musical remake of Little Shop of Horrors.

But it was in 1989 that Moranis would grab another big role, leading the way as Wayne Szalinski in the Disney movie, Honey, I Shrunk the Kids. It was a role that Moranis would play a couple more times in the sequels, Honey, I Blew Up the Kid and Honey, We Shrunk Ourselves. The series was so popular that Disney created a 4-D movie ride attraction called Honey, I Shrunk the Audience where Moranis reprised his role as Szalinski.

RICK MORANIS IN THE 90s

This decade started off great for Rick Moranis, though he wouldn’t finish it acting. He started off in the Steve Martin comedy My Blue Heaven and mixed in some other films such as The Flintstones, where he played Barney Rubble, and another big hit from Moranis, Little Giants.

Moranis’ last feature film wouldn’t be his best effort. Big Bully didn’t fare well at the box office, but this wasn’t the reason Moranis stepped away from Hollywood.

“Stuff happens to people all the time, and people make adjustments, change careers, move to another city,” Rick Moranis says. “Really, that’s all I did.”

This is how Rick Moranis explained stepping away from acting to The Hollywood Reporter (THR) in 2015. The “stuff” Moranis referred to was the untimely, unfortunate, and sad death of his wife Ann. She succumbed to breast cancer in 1991. Rick and Ann had two children before her death: Rachel and Mitchel Moranis. Though Rick Moranis continued to act for awhile after Ann passed, he saw it becoming more and more difficult to do so as a widowed father with young children at home.

The 2015 interview with Rick Moranis came about because of his refusal to appear in the female-led reboot of Ghostbusters. He said, “I took a break, which turned into a longer break. But I’m interested in anything that I would find interesting. I still get the occasional query about a film or television role and as soon as one comes along that piques my interest, I’ll probably do it. [But Ghostbusters] didn’t appeal to me.”

He caught some grief for turning down the small offered part, especially since the other original stars had cameos, but he sticks by his decision not only concerning the Ghostbusters reboot but in stepping away from Hollywood.  “I was working with really interesting people, wonderful people. I went from that to being at home with a couple of little kids, which is a very different lifestyle. But it was important to me. I have absolutely no regrets whatsoever. My life is wonderful.”

That’s not to say Rick Moranis hasn’t stayed busy. He is just extremely picky about what he does. Mainly since stepping away he has done a lot of voice work. He appeared in the Disney animated hit Brother Bear as Tuk, where he once again teamed with Dave Thomas as moose-versions of their McKenzie Brothers. He voiced the animated version the McKenzie Brothers in The Animated Adventures of Bob & Doug McKenzie. Rick Moranis also was in front of the camera in another McKenzie Brothers special, 2007s Bob & Doug McKenzie’s Two-Four Anniversary. His most recent venture was voicing Dark Helmet in a 2018 episode of the hit TV show The Goldbergs.

Now 67-years-old Rick Moranis has made it clear that he never actually retired from acting, it was more of a gradual decrease in being in front of the camera. “It wasn’t a formal decision,” he says. “It began in an already busy year where I declined a film that was being shot out of town as the school year was beginning. But I was fortunate to be able to continue to make a living writing and doing voice work in Manhattan.”

But with that said, his choice to return to acting may be considered a strange one. Yes, he is returning to the big screen (or maybe it’ll be the small screen). Nevertheless, he will be in front of the camera again as it was recently announced that Moranis will reprise his role as Wayne Szalinski in the updated or rebooted or reimagined Honey, I Shrunk The Kids movie Shrunk.

Rick Moranis will star with Josh Gad (who will play his son) and as the title suggests, things are about to get small again. The odd thing about Moranis choosing this particular movie comes from a comment he made during his THR interview. “It’s hard to come up with original material,” he says. “Occasionally, they get it right or else they wouldn’t attempt to do these things. I’m surprised that Disney hasn’t done Honey, I Shrunk the Grandkids.” Well, guess what, it looks like they are. 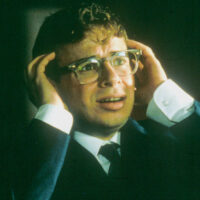 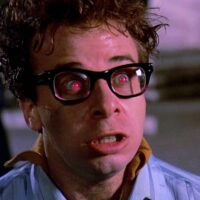 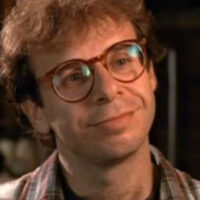 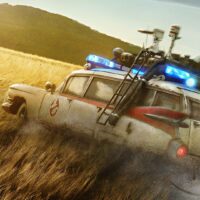