If you don’t like pop culture references, Rick and Morty isn’t for you. The very-few-holds-barred adult animated comedy series is chock-full of references to properties like A Nightmare on Elm Street, Jaws, Star Trek, Star Wars, and The Sopranos in its dialogue, plots, visuals, and even its music. Even Rick Sanzhez is essentially an alcoholic, abusive, and dialed-to-11 toxic version of Back to the Future‘s Doc Brown. So while Rick would probably have nothing nice to say about the heroes of The Matrix Resurrections, the show’s creators paid tribute to their fellow HBO Max resident with an awesome fight scene.

The image in question was posted to Rick and Morty‘s official Twitter page on Wednesday, the same day The Matrix Resurrections premiered in theaters and on HBO Max. The picture pays homage to the visually stunning action sequence from 2003’s The Matrix Reloaded in which Keanu Reeves’ Neo battles a seemingly endless horde of Agent Smith (Hugo Weaving) copies. You can see the tweet with the accompanying image below.

One big difference (you know, beyond the obvious that The Matrix Reloaded isn’t animated) is that Rick Sanchez’s Neo looks more like the newer version from Resurrections than the hero of Reloaded, who still had short hair. We also can’t help but notice that the copies of Agent Smith look more like Sanchez’s hapless son-in-law Jerry (voiced by Saturday Night Live alum Chris Parnell) than they do Hugo Weaving. Actually, with one of them just chilling on the concrete and seeming to have given up, they apparently act more like Jerry too.

This isn’t the first time in recent memory the Rick and Morty creators have posted art to pay tribute to — and help promote — sci-fi flavored Warner Bros. properties. For example, a couple of weeks after the release of Denis Villeneuve’s remake of Dune, a Dune-flavored image was posted to the Rick and Morty twitter account. Rick’s hair is done up, however, in a style more reminiscent of Kyle MacLachlan’s version of Paul Atreides in the 1984 adaptation. Morty looks like Zendaya’s Chani, and instead of a desert worm they’re being chased by a massive Mr. Meeseeks. You can see the tweet below.

For James Gunn’s The Suicide Squad, the artists did something a little different. Rather than staging Rick, Morty, or any of the other series regulars in a movie scene, they brought the movie to Rick and Morty. The day the DC film released, the artists posted a series of images to the Instagram in which each member of the main team from Task Force X was redesigned as Rick and Morty characters. You can see that series below.

The argument could be made that the Rick and Morty artists missed a golden opportunity here. Peter Capaldi’s The Thinker would be a perfect analogue to Rick Sanchez. Not only are they both mad scientists, but when you consider Thinker’s surprising response to Ratcatcher 2 (Daniel Melchior) threatening to send “a dozen angry rodents” where the sun don’t shine, he clearly boasts a level of depravity close to Rick’s. Not to mention how beautiful a mash-up of Starro and the Cromulons could be, with the resulting Godzilla-sized beast yelling down at the Corto Maltese populace, “SHOW ME WHAT YOU GOT!” 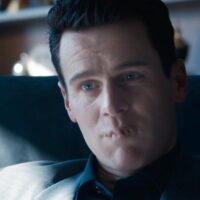 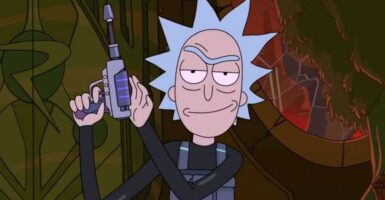 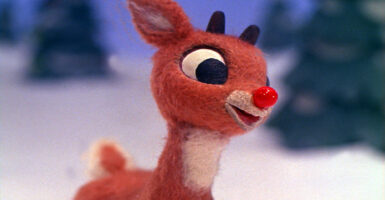