Now You Can Watch The Real Ghostbusters For Free

As terrible as it has been, the pandemic has also presented pop culture fanatics with the chance to binge new shows, rediscover old ones, pick up a new comic series, and essentially take a deep-dive into their medium of choice. Studios and franchises of all kinds have adapted to this “new normal” in some really interesting ways. And now’s another chance for this kind of nostalgia. Starting this weekend, the ’80s animated show The Real Ghostbusters is now on the Ghostbusters YouTube Channel.

The Real Ghostbusters is 100% free and allows fans of the franchise to relive the entire series in all its goofy, ghost-nabbing glory. Here is the official tweet announcing the show’s inclusion on the channel:

Set after the events of the first Ghostbusters film, the seven-season The Real Ghostbusters ran from 1986-1991 and focused on the main characters from the original. The ghost Slimer became increasingly prominent in the show’s promotion and story, with over 30 of his own shorts produced. Babylon 5 creator J. Michael Straczynski even wrote and edited some of the stories for the show.

Other notable names in animation, including Batman: The Animated Series‘s Michael Reaves, were involved with The Real Ghostbusters conception and production. It was nominated for an Emmy and even inspired a run of comic books. The series was previously available on Netflix from March 31, 2017, to March 31, 2019, before moving to YouTube. Hopefully, it stays on YouTube for a long time so it can gain a new audience.

This recent news about The Real Ghostbusters is in line with other things we’ve seen across the industry. Streaming companies are getting more than a little creative. WB’s recent decision to release their biggest movies of the year on HBO Max and in theaters and you’ve got a taste of how drastic some of these money-saving (and money-making) measures have been. Chances are pretty good that more industry-changing shake-ups are on the horizon, but it is impossible to predict just what they will be and when they will come.

In terms of what is coming up for the Ghostbusters franchise, there is Ghostbusters: Afterlife, a sequel starring Paul Rudd, Finn Wolfhard, Carrie Coon, Mckenna Grace, as well as franchise staples Sigourney Weaver, Bill Murray, Ernie Hudson, Dan Aykroyd, and Annie Potts. Jason Reitman, the son of the original film’s director, is helming this new adventure. Following a thrice-moved release window, the film is finally slated for release on November 11, 2021. Who knows if that release date will stand, though?

Even if you were not raised in the ’80s and ’90s, there’s a lot to love about the Ghostbusters franchise. The original film showcased fantastic performances from that aforementioned group plus Rick Moranis and the late Harold Ramis. It had a little something for everyone and featured characters and references that have since become staples of pop culture.

The original film holds up really well, as does The Real Ghostbusters. What’s more, even if you are just looking for a bit of nostalgia, there is so much fun to be had in reliving these adventures.

Will you be watching The Real Ghostbusters? If you have seen it, let us know what you think of it! If you have not seen it, then what in the world are you waiting for? It’s free! 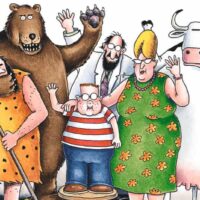