Thanks to a clip that is speeding around the internet, we are finally getting a clear look at Pierce Brosnan as the DCEU superhero Dr. Fate aka Kent Nelson. Warner Bros released a three minute teaser compilation of their upcoming 2022 DCEU releases, and there is something for everyone there. If you’re a fan of Jason Momoa’s smoldering eyes and underwater beard, there are some shots of Aquaman and the Lost Kingdom. If you’re excited for Robert Pattinson’s take on Batman as Kurt Cobain, there’s plenty of Matt Reeves’ The Batman. If you like Dwayne Johnson appearing in most films being released in the next several years, he’s there as Shazam nemesis Black Adam. If you like Hawkman for some reason, he’s there too. But best of all, we get to see 1990s James Bond as the mystical superhero Dr. Fate, and frankly, he looks fantastic. Check it out here:

At about 47 seconds in, we get to see Pierce Brosnan in character as Dr. Fate. There is a shot of him in full costume, which involves an iconic, full-face golden helmet, and another of Brosnan sporting an impressive silver beard and mane of hair. The character is set to appear in the Dwayne Johnson movie Black Adam, which will feature the actor/wrestler/tequila mogul as the titular superpowered antihero. The details of the film are still a little murky, but it is known that Black Adam is the original inheritor of the powers given to Billy Baston in the movie Shazam!, but that his misuse of them led to the deaths of countless people and the downfall of a civilization. So he’s probably not that great of a guy, but given that he’s being played by The Rock, he probably has his reasons. Within DC Comics canon, Dr. Fate is traditionally part of the Justice Society of America, the original superhero team of that universe and the precursor to the Justice League we all know and love. Noah Centineo is set to appear in Black Adam as Atom-Smasher, another Justice Society member, as well as ​​Quintessa Swindell as Cyclone.

Pierce Brosnan is best known for his stint as James Bond from 1995 to 2002, beginning with the movie that launched a million N64 nights, GoldenEye. Sandwiched between the brief, grim portrayal of 007 by Timothy Dalton and the longer, even grimmer one of Daniel Craig, Brosnan’s Bond had a lighter, wittier take and is still remembered fondly. In recent years, he has appeared in the ABBA jukebox musical films  Mamma Mia! and Mamma Mia! Here We Go Again, as well as the already legendarily bad fantasy film The King’s Daughter as French King Louis XIV. Black Adam will be his first appearance in a superhero film, and rumors are already swirling that he is being courted by the MCU for an undisclosed villain role. Black Adam is set to be released in theaters on July 29, 2022, along with a whole slew of related DCEU projects featured in the clip. 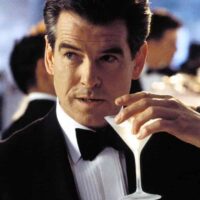