​​Patrick Stewart Is Getting A Son On Star Trek: Picard

A very interesting Star Trek: Picard Season 3 plot detail has emerged before Patrick Stewart has even debuted again in Season 2 of the Star Trek: The Next Generation spinoff.

The highly anticipated return of Patrick Stewart as (Admiral in rank but Captain in our hearts) Jean-Luc Picard premiered in January of 2020 and offered fans their first look at what the character was up to since the conclusion of his run in the film Star Trek: Nemesis. With Seasons 2 and 3 already greenlit at the Paramount+ streaming service, the rumor mill is already churning out possible plotlines for the subsequent stories.

According to a new rumor from The Illuminerdi, Season 3 will introduce a long-lost son that Patrick Stewart as Picard was previously unaware of. The outlet reports that the character is going to be a man in his early 20s named Henry. As a result, he was likely born canonically in the year 2370, sometime after the events of the film Star Trek: First Contact but before the events of Star Trek: Nemesis. While this doesn’t offer a lot of information, it’s worth noting that Picard had a brief romance with a woman named Anij in the movie Star Trek: Insurrection, which took place in that time.

Check out Patrick Stewart in the latest teaser for Star Trek: Picard.

Henry is expected to be presented with either a British or American accent. Regardless, he will be a headstrong and independent young man with a “take from the rich, give to the poor ” attitude toward morality, according to the outlet. When he finds himself in the midst of a galaxy-spanning conspiracy, his journey to get to the bottom of it and reevaluate everything he believes about the universe puts him right at his long-lost pop’s doorstep. Fans can only hope that this will put Patrick Stewart as Picard in a position to demonstrate some of the fatherly nature he rarely showed his de facto son, Wesley Crusher on the original show.

However, the outlet notes that Season 3 is a long way away and that Patrick Stewart hasn’t even begun properly teasing Season 2. As a result, all the information about Henry, such as the studio eyeing actor David Corenswet for the role, is subject to many, many changes before Season 3 drops.

However, while a Patrick Stewart Season 3 arc with a long-lost son may sound improbable for a character as self-aware as Jean-Luc Picard, the key to the events of Season 3 may have to do with the return of another beloved Star Trek: The Next Generation character in Season 2. The first teaser trailer for the show’s return dropped earlier this year, revealing that John de Lancie is reprising his role as the omnipotent being Q.

As Gizmodo notes, the trailer teases that something will happen that sets Picard and his new crew on an adventure to save time, which has somehow been thrown out of whack almost certainly by Q. Patrick Stewart is seen in his Starfleet uniform, which either teases a flashback to his days before retirement from the job or that the reality he once knew has been altered in some way. Regardless, whatever time-travel romp the crew finds itself in at the end of Season 2 could introduce a new being into existence for Season 3 — a long-lost son from a sexual encounter that never once was, perhaps?

For those who need a refresher, Patrick Stewart first encountered Q in his first outing as Picard in the pilot episode of Star Trek: The Next Generation. He popped up throughout the series, showcasing his omnipotent and mischievous powers to test Picard and his crew in order to determine if humanity was worth saving or if the Q continuum should simply wipe it out to make room for more advanced civilizations to thrive. It seems the test isn’t over for Picard in Season 2. 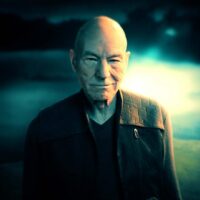