We're sure Frogger is right behind it.

Related:
Metal Gear Solid: Everything We Know About The Oscar Isaac Movie

Do you ever find yourself thinking, “hey, my nightmare fuel is running low and I really need to recharge?” Well, stop worrying right now. The Pac-Man movie — a live-action Pac-Man movie, no less — is on the way, and your nightmares will never be the same.

Of course, we could be wrong and a live-action version of Pac-Man could be something other than terrifying, and apparently we’re going to find out for sure. According to The Hollywood Reporter, the live-action Pac-Man movie is currently in development. So far, the film is a collaboration between the yellow pellet-eating hero’s home of Bandai Namco Entertainment and Wayfarer Studios. The idea for the film comes from Chuck Williams, one of the producers of 2020’s Sonic the Hedgehog.

Development on the Pac-Man movie is presumably still in the very early stages as THR didn’t offer any news on directors, writers, or acting talent for the film. Without more information it’s difficult to conceive exactly what Chuck Williams has in mind. In Pac-Man, the player guides the titular disc-shaped pellet-chomper through mazes and avoids the ghosts who try to catch it. In the original version of the game that hit the United States in the eighties, there was no narrative to be found in the title; no bosses to defeat. Of course, as THR notes, there have already been a couple of animated series based on the property, though bringing it to live-action is something else entirely. You can watch an example of Hannah Barbera’s eighties Pac-Man cartoon below.

The Pac-Man movie is likely a response to the growing success of video game adaptations. Bringing video game stories to Hollywood used to be a joke. With stinkers from 1993’s Super Mario Bros. to 2005’s Doom seeming like the norm, gaming fans learned to meet each new piece of adaptation news with cringes. Now, with successes like the Sonic films, this year’s Uncharted, and Paramount+’s Halo, Hollywood seems more willing than ever to mine the gaming world for every concept it can adapt. There are more gaming adaptations in various stages of development than we can comfortably list here but they include Fallout, Twisted Metal, Mass Effect, BioShock, Metal Gear Solid, The Last of Us, God of War, Borderlands, and more.

One could argue that it’s about time Pac-Man gets his own movie, since he wound up showing up on the big screen in the 2010s regardless. He was one of the villains of 2015’s Pixels, and even made a brief but memorable appearance in 2017’s Guardians of the Galaxy Vol 2. If he’s going to be in the movies anyway, why not show up as his own hero?

But it does bring up a number of disturbing questions, especially since this Pac-Man movie will be live-action. Will he appear as a digital character in a non-digital world — as he does in Pixels — or will he actually be a creature who’s supposed to be a part of the real world, like Sonic in his films? Will Pac-Man eat his enemies, like he does in the game? If so, how could this possibly be marketed as a family film? If not, how could it possibly be Pac-Man? Finally, exactly how many pills — and what kind — will we all have to take to watch the inevitable Pac-Man movie teaser without suffering serious trauma? 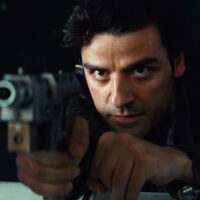 Metal Gear Solid: Everything We Know About The Oscar Isaac Movie

James Gunn Almost Made A Movie About Gaming’s Best Assassin