Oscar Isaac is in negotiations to star as Moon Knight in an upcoming series on the streaming platform Disney+. The casting has made fans extremely excited about this upcoming project and there is already speculation as to how the beloved actor could appear as this masked vigilante of the night.

Instagram user venomhology went ahead and decided to create an image that could give us some idea of how Oscar Isaac will appear as Marc Spector a.k.a. Moon Knight. Check out their illustration right here:

Oscar Isaac certainly cuts a great figure as Moon Knight. The illustration by venomhology takes inspiration from the very typically superhero armor design of Moon Knight’s costume. However, one of the things that will be interesting about this adaptation is that the character of Moon Knight has had a number of very different costumes over the course of his publication history.

Exactly which costume Oscar Isaac will be wearing is going to be the subject of a lot of fervent speculation. One of the most popular iterations of Moon Knight was created in recent years by Warren Ellis and Declan Shalvey. It’s one of Moon Knight’s many personalities – the character is host to a number of different entities or he can be depicted as having dissociative identity disorder – that approach the act of crime-fighting very differently.

The personality is called Mr. Knight and is something of a cross between John Wick – appropriate since Keanu Reeves was heavily rumored for the role before Oscar Isaac nabbed it – and a traditional detective character that assists the police. This version of the character has proven to be a widely beloved take on the character, so it is possible this could be the take we see in the upcoming Disney+ series.

However, what could be really cool about Oscar Isaac in the Moon Knight series is the fact that his multiple personalities means that he decides to wear totally different costumes depending on what personality is the most dominant at the time. We have seen that audiences enjoy watching the Marvel Cinematic Universe characters get new costumes and upgrades to their outfits over the course of these movies. Getting to bake that into a character like Moon Knight means that each episode could present us with the option for a brand new costume.

We look forward to seeing exactly what Oscar Isaac will look like when he finally dons the ghostly garb of Moon Knight. For now, let’s take this fan art as something to tide us over while we wait for an official reveal. 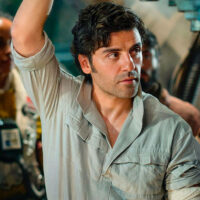