In a career that’s lasted over 40 years, Nicolas Cage has appeared in a lot of roles set in the western half of the United States. Among other films there’s his Coen Brothers classic Raising Arizona, the David Lynch directed Wild at Heart, his time as a creature from Heaven in City of Angels, and his Oscar-winning turn in Leaving Las Vegas. But while his characters might be in the Pacific time zone a lot, the chance at starring in an actual bonafide Western film has eluded him until now. Cage recently filmed not one, but two Westerns back-to-back and the first of them — The Old Way — is due out later this year. We’ve got one of the earliest images from the film, which finds Cage and his character’s daughter hunting a killer

Deadline posted the image earlier this week, with the news that Saban Films had acquired the North American and overseas distribution rights for The Old Way. The image accompanying the story shows Nicolas Cage kneeling next to Ryan Kiera Armstrong (The Tomorrow War) as they both look off in the distance. In the background, a horse grazes. You can see the image below.

In The Old Way Nicolas Cage plays Colton Briggs, a former gunslinger who has tried to leave his violent past behind, but he gets pulled back into the world of gunsmoke and gore when his wife is murdered. Apparently wanting justice, vengeance, or a little bit of both, Briggs hits the trail with his daughter Brooke (Armstrong) to hunt down his beloved’s killer. Deadline names the killer as McCallister who — judging by the film’s IMDb page and Deadline’s September 2021 cast announcement — is likely James McCallister, played by Noah Le Gros (1883). Another candidate is Robert McCallister, played by Boyd Kestner (Hannibal). Brett Donowho (Acts of Violence) is directing, from a script by Carl W. Lucas (The Wave). There’s no firm release date just yet, but Deadline reports Saban Films is targeting the fourth quarter of this year for a release in theaters and video on demand.

Nicolas Cage’s upcoming Western became relevant in a way that no one expected or wanted last October. After the tragic death of cinematographer Halyna Hutchins on the set of Rust, one of the first names that popped up as an alleged responsible party was that of Rust armorer Hannah Gutierrez-Reed. The woman’s qualifications as an armorer came into question, and a story surfaced about Gutierrez-Reed’s first job as an armorer on The Old Way. According to a key grip from the latter film, Stu Brumbaugh, the armorer allegedly discharged a pistol on The Old Way set without warning anyone. The key grip said that Cage scolded her with, “Make an announcement, you just blew my f—ing eardrums out!”

According to Collider, Nicolas Cage shot The Old Way and Butcher’s Crossing back-to-back, and the first image of Cage in the latter film (above) surfaced last October. Based on the 1960 novel of the same name by John Edward Williams, Butcher’s Crossing will star Cage as Miller — the leader of a team of buffalo hunters. It will be the narrative feature debut of director Gabe Polsky, and co-written by Polsky and Liam Satre-Meloy. Saban Films acquired the distribution rights for the film last September, per Variety, though no release date has been announced. 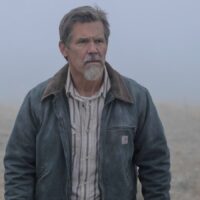