It may be more difficult to tell these days because he doesn’t carry the same industry cache he once did, but Nicolas Cage is still putting out a ton of movies. They tend to be smaller affairs, ranging in genre but ultimately releasing to much more narrow audiences. There is definitely a sense that fewer people are watching Cage movies these days, even the actor himself. Recently, in an interview with Variety, Cage admitted that he wasn’t going to even watch one of his next movies that will hit the screen.

The interview with Nicolas Cage is an intimate look at his career path and why he’s chosen to distance himself from Hollywood, both geographically as well as the larger studio presence. He’s talking about this in context to the movie Pig which releases this week. But near the end, he talks about the next flick he has coming in the pipeline. That’s going to be The Unbearable Weight of Massive Talent. It’s setting up to be a very odd premise, unbelievably meta in nature, and likely very weird. Cage seemed to agree, saying this to Variety:

I will never see this movie. I’m told it’s a good movie. I’m told people love it and are enjoying the ride, but I made that for the audience. It’s too much for me to go to the premiere and sit there with everybody. Psychologically, that’s too bizarre and whacked out for me.

So why would Nicolas Cage refuse to see a movie he starred in? Well, it might be because in the movie he plays a fictionalized version of himself. Ok, so far so good. But the rest of the flick does sound really weird. In it, Cage, playing himself, signs on to do a celebrity appearance (as Nic Cage) to attend the birthday party of a billionaire’s daughter. But this Nicolas Cage is actually a CIA agent who has been sent in to take down a drug kingpin.

During a sequence of events, Nicolas Cage has to turn into various movie versions of himself to save the day from a hostage attempt. From Cage’s perspective, it sure sounds like he plays every version of himself (both real and fake) in the movie. One can see why he might not want to watch this experience play out on the big screen.

Nicolas Cage was originally set to not watch himself in The Unbearable Weight of Massive Talent this year, but the film was delayed because of pandemic-related shutdowns. It appears as if filming is completed but they’ve scheduled it to release next year. It also stars Pedro Pascal and Tiffany Haddish. From a popularity perspective, this could be one of Cage’s bigger releases in some time.

In the meantime, Nicolas Cage has Pig hitting theaters in a limited fashion this week. He plays a former celebrity chef who returns to his hometown on a mission of vengeance to rescue his pet pig. While not as weird as playing different versions of himself, this one does have an odd dynamic to it. But critics are showering it with praise. It’s currently sitting at 97% on Rotten Tomatoes through 71 reviews with a number of folks saying this is one of Cage’s best performances in years.

Nicolas Cage was also set to take on the Amazon adaptation of Netflix’s The Tiger King, playing Joe Exotic in the series. But it looks like those plans have been scrapped and Cage is leaving the project. I guess he’ll just have to settle for playing himself. 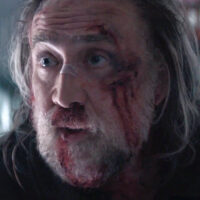