Nicolas Cage has a reputation for saying yes to any project that comes his way. As such, his career catalog is a mix of brilliant and confusing performances. It also makes it impossible to type-cast the 58-year-old because he’s not afraid to take on any genre. So it was rather surprising to learn that the National Treasure star actually turned down roles in two popular movie franchises – Lord of the Rings and The Matrix.

Speaking to People during the press tour for his latest offering, The Unbearable Weight of Massive Talent, Nicolas Cage explained why he turned them down. Unlike his character, who doesn’t pay much attention to his teenage daughter, nothing is more important to the star than family. He’s always put his work second for his kids. “First and foremost… there’s no version of Nic Cage in reality that doesn’t want to spend time with his children,” he said.

The actor went on to explain how the timing for The Matrix and Lord of the Rings films just didn’t line up with his priorities at the time. “I turned down Lord of the Rings and I turned down Matrix because I didn’t want to go to New Zealand for three years, or Australia for three years because I needed to be home with my son Weston,” Nicolas Cage said. “So there is a huge disparity between that Nic Cage in Massive Talent and the Nic Cage sitting in front of you right now,” he told the publication.

Although the version of Nicolas Cage in Massive Talent may not be exactly like the real thing, the movie does include some true elements. It pokes fun at his storied movie catalog and the passionate fans that follow his every move. Addressing those aspects of his life, the actor said being able to laugh at himself is something he’s fostered for years. Because if you don’t, it’s easy to get caught up in your own hype. That’s when stars become pretentious and fall into the realm of a diva, making mistakes on and away from the camera. While Cage may have had some odd turns and dead ends in his long and varied career, it is hard to say that he does not come back from mistakes no matter what.

Interestingly, the director of The Unbearable Weight of Massive Talent, Tom Gormican, and his screenwriting partner Kevin Etten were both surprised at just how different Nicolas Cage was from the wild public persona that precedes him. He told People that the Oscar winner was so unbelievably prepared and he had thought so much about the character, they were just fascinated by his process.

The Unbearable Weight of Massive Talent stars Nicolas Cage as a parody version of himself. The story begins when (fictional) Cage agrees to a $1 million payout to attend a billionaire super fan’s extravagant birthday party. But when things take a twisted turn, he has to become a version of some of his most iconic movie characters to save his wife and daughter from the fan who also happens to be a notorious arms dealer.

Starring alongside the legendary Nicolas Cage is Sharon Horgan as his wife Olivia, Lily Sheen as their daughter Addy, and Pedro Pascal as super fan Javi Gutierrez. Neil Patrick Harris appears as Richard Fink, with Tiffany Haddish, Ike Barinholtz, Alessandra Mastronardi, and Jacob Scipio. The film has received mostly positive reviews from early screenings, with critics describing the project as, smart, funny, and wildly creative. The Unbearable Weight of Massive Talent will be released to the general public on April 22, 2022. 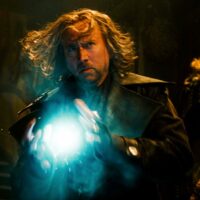 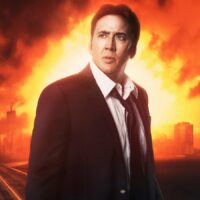