We may be getting another entry to the Scream franchise with Scream 6, but unfortunately, it’ll have to be with Neve Campbell. Though her character Sidney Prescott has been in all five previous entries to the franchise, it seems the deal she was offered to return didn’t reflect her importance to the franchise. In an interview with People, Campbell talked about the pay discrepancy between her and male stars who would have received more compensation for long-running roles, saying “I did not feel that what I was being offered equated to the value that I bring to this franchise, and have brought to this franchise, for 25 years, and as a woman in this business, I think it’s really important for us to be valued and to fight to be valued.” She added, “I honestly don’t believe that if I were a man and had done five installments of a huge blockbuster franchise over 25 years, that the number that I was offered would be the number that would be offered to a man.”

While it will be disappointing to miss out on Neve Campbell’s performance in Scream 6, her stance is certainly understandable. While the gender pay gap for the average career is already substantial, with women earning 83 cents for every dollar earned by men according to a 2020 survey by the United States Census Bureau, the disparity is even more prevalent in Hollywood. A study by Forbes in 2018 revealed that the top ten highest-paid actresses earned less than 30 cents for every dollar earned by their male counterparts. The ten highest-paid actresses’ salaries totaled $186 million that year, while the 10 highest-paid men earned $748.5 million. If the producers and studios behind Scream want to bring Neve Campbell back for future installments, it seems like they’ll need to make a more worthwhile offer.

While Neve Campbell is going to be a definite no for Scream 6, it doesn’t mean the cast will be completely devoid of returning characters. Melissa Barrera, Mason Gooding, and Jenna Ortega are back, reprising their roles from the 2022 movie. The cast is rounded out by Melissa Barrera, Mason Gooding, and Jenna Ortega, reprising their roles from the 2022 movie. Newcomers include Jack Champion, Liana Liberato, Devyn Nekoda, Josh Segarra, Henry Czerny, Samara Weaving, Tony Revolori, and Dermot Mulroney. Also, Hayden Panettiere is returning as the fan-favorite Kirby Reed from Scream 4. While she missed out on the last movie, she talked to the producers and managed to snag a role in the upcoming installment. And while Neve Campbell won’t be joining in on the slasher fun, we will be getting one OG cast member from the first Scream with Courteney Cox.

Related:
Scream 6: Why Did Neve Campbell Quit The Franchise?

Scream 6 will see the four survivors from the previous installment leaving Woodsboro, a first for the franchise, and heading to New York City. Unfortunately, this doesn’t mean they’ll be leaving Ghostface behind too. The movie will be directed by Matt Bettinelli-Olpin and Tyler Gillett with a script from Guy Busick and James Vanderbilt. Though fans of Sidney Prescott won’t get to see her in Scream 6, they don’t have to lose hope completely. In her interview with People, Campbell mentioned she’d be open to future installments if they came up with a more fair offer. Scream wouldn’t be quite the same without Sidney Prescott, so it seems likely they’ll try to bring her back into the fold if and when the franchise continues. Until then, you’ll just have to find out what the Scream franchise is like without her when Scream 6 hits theaters on March 31, 2023. 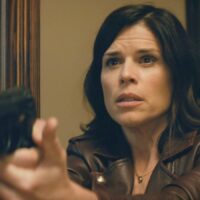