The hit Neil Patrick Harris series, Uncoupled, has been canceled.

No Netflix show is safe, and every season seems to come with a stream of cancellations. Deadline reported that the latest victim of Netflix’s unflinching cancellation ax is the Neil Patrick Harris comedy series Uncoupled. The series was created by Jeffrey Richman (Modern Family) and Darren Star (Emily in Paris).

Neil Patrick Harris starred in Uncoupled as a single gay man in his mid-40s who has to navigate the New York dating scene after his partner of 17 years suddenly leaves him. The series also starred Tisha Campbell, Brooks Ashmanskas, Emerson Brooks, Marcia Gay Harden, Tuc Watkins, Nic Rouleau, Jasai Chase Owens, and more. The series was executive produced by Harris, Star, and Richman along with Tony Hernandez and Lilly Burns.

While Neil Patrick Harris’ Uncoupled was well-liked by viewers and popular enough to crack Netflix’s Top Ten after its release, it wasn’t able to maintain its spot and get the lofty viewership numbers Netflix expects from new shows. The series is a half-hour comedy, which does make it more difficult to hold on to high rankings due to the minutes-viewed ranking system. While it’s certainly disappointing that the show isn’t getting another season on Netflix, it’s not necessarily a surprising development.

While we won’t be seeing Neil Patrick Harris in new episodes of Uncoupled anytime soon, we will get to see him in the upcoming special Doctor Who episodes which are being released for the show’s 60th anniversary. Although his character has not been named yet, it was announced that he would be playing a villain and antagonist to Doctor Who. The special episodes will also feature the return of David Tennant and Catherine Tate.

Neil Patrick Harris also has the long-gestating Anita biopic on his plate. Anita tells the story of Anita Bryant, who became infamous for spreading anti-gay rhetoric and attempting to overturn gay rights laws in the 1970s. Ashley Judd stars as Bryant and Harris will play journalist Chad Hodge, who is also writing and directing the movie.

In the meantime, you can see Neil Patrick Harris in the first season of the now-canceled Uncoupled on Netflix. You can also see him in his other 2022 project The Unbearable Weight of Massive Talent. Also, make sure to watch out for him in the Doctor Who 60th-anniversary episodes, which are set to release later this year. 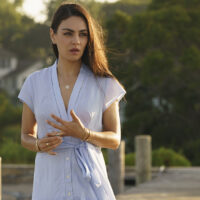