Ms. Marvel is set to break down barriers when she first hits the screen. In addition to being just a kid with a plethora of superpowers, she is also going to be the first Muslim character to appear in the Marvel Cinematic Universe. For a franchise that has operated with a steady stable of actors and actresses in well-known roles, this does represent one of the newer faces to the Marvel Cinematic Universe. And now we have our first look at what Ms. Marvel will look like in costume.

The tweet, which comes via @BRMarvelNews gives us our first glimpse of Kamala Khan/ Ms. Marvel, played by Iman Vellani. The suit, with a helmet that diverges a bit from the original version of the character in the comic books, is our first look at the character. There’s definitely a teeny-bopper vibe to the appearance replete with a backpack, skater helmet, and a leather-looking jacket that rounds out the outfit. But under the sleeves, it sure looks like she’s sporting the power bands. It’s unclear if this is the final version of Ms. Marvel’s appearance or a hybrid version as she is out in the “real world” but it’s an exciting time for those getting pumped for the series.

The Kamala Khan version of Ms. Marvel is the fourth iteration of the character in the comic books and the first Marvel character to have a Muslim background. In the comic book version, she’s a 16-year-old New Jersey kid. Iman Vellani is 19 so they will presumably keep Ms. Marvel on the same relative timeline. In the comics, which debuted in 2014, Khan worships Carol Danvers’ version of Captain Marvel and discovers she has somewhat similar powers.

While these first on-set photos display a different vibe for the heroine, it stands to reason we eventually see the original suit Khan uses. That one, with the eye mask and flowing scarf in place of the cape, is likely to be what she wears when actually putting the superpowers on display. Plus, we know that Khan’s powers include shapeshifting so there’s going to need to be some flexibility with whatever costume she ends up donning.

Ms. Marvel is part of the Marvel Cinematic Universe’s Phase 4 and will be a show on the Disney+ streaming platform. It joins other new projects like WandaVision, The Falcon and the Winter Soldier, Hawkeye, and She-Hulk among others.

Casting Vellani as Ms. Marvel means bringing an unknown face to a lineup that has plenty of carryover from the previous Marvel Cinematic Universe phases. In fact, this is Vellani’s first-ever acting credit which, considering the size and scope of this franchise, is pretty remarkable. Current timelines have Ms. Marvel coming to Disney+ either at the tail-end of 2021 or in early 2022.

Bringing the Kamala Khan character into the universe should do well with Marvel expanding its viewership to a slightly younger audience as they continue growing an already vast world. And considering the diversity of the character and the groundbreaking piece of her background, Marvel continues pushing boundaries around the faces of superheroes. 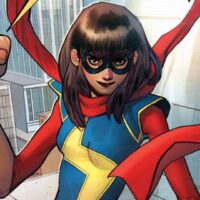 Ms. Marvel: All You Need To Know About The Disney+ Series