Stranger Things fans are about to be very excited if the latest rumor is true. Insider Daniel Richtman has just told his Patreon that Netflix is working on an Eleven spinoff series for actress Millie Bobby Brown.

While we don’t know much about what the streaming giant is planning yet, there’s a lot we can guess at here. Stranger Things has been a hit since it was first released on Netflix in 2016. At the center of that success has been Millie Bobby Brown. She is now 16 years old, the star of two successful Netflix projects, and is signed on for more. It would make sense that Netflix would want to keep building on the success they’ve had with both her and Stranger Things. It would make more sense to put the two together for a brand new project.

What could a Millie Bobby Brown spinoff series be about? It seems likely that we don’t know enough of the answers for that yet. Stranger Things season four is currently in production. There’s no telling when the spinoff series will happen. We also don’t know how many more seasons of Stranger Things there will be, or whether the spinoff series will start airing before the end of the main show. It does seem to be a likely possibility that the spinoff series would follow Eleven on a personal journey. That could be doing more to discover her own backstory. Alternatively, she could go into the world and discover more people like her. We saw a taste of this with Millie Bobby Brown’s character in season three. Could Eleven be joining up with more powerful characters? Will we see her do more to explore new dangers in the world?

The creators of Stranger Things have pulled a lot of inspiration from ’80s horror movies, Steven Spielberg, and Stephen King when making Stranger Things. If this project with Millie Bobby Brown happens, we might find more story clues when they’re interviewed about their inspirations for the spinoff series.

This is a big step for Millie Bobby Brown. Her career has been growing by leaps and bounds in recent years. There continue to be rumors of an Enola Holmes 2 project. She is currently set to start in a sci-fi movie calledThe Electric State from the Russo Brothers. The actress is also working with Netflix on a new fantasy film titled Damsel. The movie will follow Princess Elodie as she is set to marry a prince, only to discover she’s actually being sacrificed to a dragon. This would be a prime time for her to also star in her own new spinoff series.

In terms of who else would be involved in the Millie Bobby Brown spinoff, we also know that Matt and Ross Duffer are signed on for a multi-year deal for projects at Netflix. The Duffer Brothers are the team that created Stranger Things and have been showrunners for the series. Their multi-year overall deal is for creating new films and television series for the streaming service. It makes sense, then, that one of those projects could be a Stranger Things spinoff starring Millie Bobby Brown. 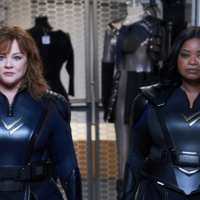