After four successful seasons on the Netflix series Stranger Things, actor Millie Bobby Brown is solidifying her stake in streaming by starring in the sequel to her well-received Netflix film, Enola Holmes. Enola Holmes 2 is set to drop on the subscription streaming platform this weekend, and Brown has been busy promoting the sequel on various talk shows and interview segments. In an interview with ET Canada, Millie Bobby Brown explained that she tends to torture costar Henry Cavill on set by annoying him with her singing voice, talking about reality television, and teasing him with her loud voice.

Ever the extrovert it seems, Millie Bobby Brown appears to enjoy making Henry Cavill uncomfortable whenever she gets the chance as he tends to be an introvert himself, and the two performers have now worked together on both Enola Holmes films so far. With an age difference of 21 years between them, Brown told ET Canada that Cavill is “just not interested” in anything she likes to talk about, knowing full well that she’s teasing him in the process. She goes on to say that so far in their working relationship, her on-set annoying antics are just the start, as “we haven’t even got to stage 10.”

All jokes aside, Millie Bobby Brown and Henry Cavill appear to get along just fine in working together on the Enola Holmes set of films. The first movie premiered on Netflix in September 2020 as it told the story of the teenage sister of Sherlock Holmes (Cavill), who embarks on an adventure to London to locate her missing mother, solving a mystery of her own along the way. Brown and Cavill costarred in Enola Holmes alongside British actors Sam Claflin, Louis Partridge, Fiona Shaw, Burn Gorman, and Helena Bonham Carter as family matriarch Eudoria Holmes.

Initially intended for a theatrical release by Warner Bros. Pictures, Enola Holmes changed distribution course and moved to a streaming premiere on Netflix amid the COVID-19 global pandemic, similar to many movie releases of that year. The movie was a success for its cast, which included Millie Bobby Brown and Henry Cavill, as it became one of the most-watched original Netflix flicks to date and sparked rumors of a sequel that would eventually go into production with some of the original cast.

Rotten Tomatoes currently ranks Enola Holmes as Certified Fresh with a 91% on its Tomatometer based on 207 critics’ reviews, while audiences also embraced the mystery film with an Audience Score of 70% based on over 2,500 ratings from verified users to the site.

Enola Holmes 2 rolls into the streaming universe this weekend with Millie Bobby Brown, Henry Cavill, Louis Partridge, and Helena Bonham Carter reprising their roles from the original film. The sequel counts Brown as one of its producers, as she took the same position in Enola Holmes, the first producing credit of her film career. While Sam Claflin was unavailable to come back for the sequel, Enola Holmes 2 will costar a new set of cast members, including Doctor Who alum Sharon Duncan-Brewster, Harry Potter actor David Thewlis, and Bridgerton star Hannah Dodd. 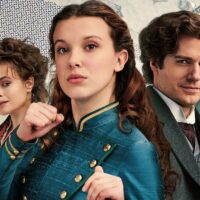 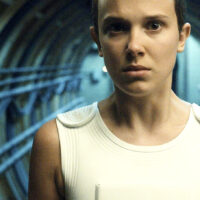