Mike Myers is returning to our screens in a brand new Netflix series called The Pentaverate. Directed by Tim Kirkby, the comedy series will consist of six episodes which will debut via the streaming service on May 5th. Created by the legendary Austin Powers star, the show’s premise poses a question. “What if a secret society of five men has been working to influence world events for the greater good since the Black Plague of 1347?”

Interestingly, this isn’t a unique concept. Mike Myers previously mentioned The Pentaverate in the 1993 romantic dark comedy film, So I Married an Axe Murderer. The story followed a commitment-phobic Charlie who starts to believe his girlfriend is a serial killer. During the film, his father rants about the secret group. He explains that the Queen, the Vatican, the Gettys, the Rothschilds, and Colonel Sanders make up the five members whose influence extends across the world.

See Mike Myers mention The Pentaverate in the clip from So I Married an Axe Murder below:

As such, The Pentaverate could be seen as something of a spin-off from the movie. However, it’s unclear if there are any other links than the above-mentioned secret society. As the series begins, an unlikely Canadian journalist (played by Mike Myers) finds himself involved in a mission to uncover the truth about the five influential men, and possibly save the world all on his own. The fast-paced trailer is filled with Myers’ unique brand of comedy. With Jeremy Irons serving as narrator, we also get a glimpse of the cast.

Check out the video clip for the Mike Myers series below:

Mike Myers will be playing eight different roles in The Pentaverate, with Jennifer Saunders taking on two. According to Deadline, his colorful list of characters includes:

Joining Mike Myers in the cast is Ken Jeong as a casino mogul Skip Cho who has extensive knowledge of weather patterns. Keegan-Michael Key stars as Dr. Hobart Clark – a nuclear physicist who was recruited into the Pentaverate to resolve the climate change disaster. Debi Mazar appears as Patty Davis, the highly trusted Executive Assistant to the Pentaverate.

Richard McCabe portrays Head of the Liechtenstein Guard Exalted Pikeman Higgins, the Pentaverate’s security force. Lydia West is featured as a young woman named Reilly Clayton who works at the Canadian news station with Ken. And Jennifer Saunders stars as The Maester of Dubrovnik and the Saester of Dubrovnik. Other than Mike Myers, she is the only other star who takes on more than one role. 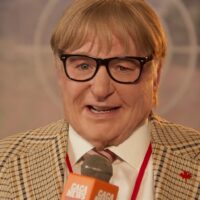