People absolutely love the mind-bending new sci-fi comedy Everything Everywhere All at Once. Starring Michelle Yeoh, the film has as an amazing 97% score on Rotten Tomatoes, matched with a 91% approval from audience members — a rare agreement between reviewers and fans. With that kind of reaction, you would think that, fittingly, everyone everywhere would want a chance to see the flick. Sadly, it looks like in one part of the world audiences won’t get the chance. The movie is being banned in parts of the Middle East, including Saudi Arabia and Kuwait.

Deadline reports that while Everything Everywhere All at Once was picked up by a distributor in the region, Saudia Arabia and Kuwait are refusing to screen the film because of the sadly unsurprising reason that it features LGBTQ representation. One character in the film — Stephanie Hsu’s Joy — is gay and part of the film features Michelle Yeoh and Jamie Lee Curtis playing a same-sex couple. Deadline believes the feature may actually manage to hit theaters in some parts of the Gulf region, but the “key markets” of Saudia Araba and Kuwait are lost to the film.

The Michelle Yeoh starrer isn’t the first film to be barred from viewing in parts of the Gulf because of LGBTQ representation and it likely won’t be the last. No one in Saudia Arabia will be seeing Doctor Strange in the Multiverse of Madness because censors in the country object to the gay superhero America Chavez, played by Xochitl Gomez. For similar reasons, last year’s Eternals and West Side Story were denied Gulf audiences. Along with Saudia Arbia and Kuwait, Middle East nations known for banning movies with LGBTQ representation include Bahrain, Qatar, the United Arab Emirates, and Oman.

The good news is that no homophobic censorship seems likely to stop Michelle Yeoh any time soon. Along with Everything Everywhere All at Once‘s success, she has a number of exciting projects coming up. She looks to be playing a bad-ass elf warrior in Netflix’s upcoming prequel mini-series The Witcher: Blood Origin. Not to mention she has a starring role in all four of James Cameron’s Avatar sequels, including this year’s Avatar: The Way of Water.

If you love Michelle Yeoh as much as we do — and you should — then love him or hate him you should at least whisper one little thank you to Quentin Tarantino. In an interview The Hollywood Reporter published in March, Yeoh credited the director for indirectly convincing her to keep acting. She told THR she was recovering from a bad back injury she sustained while filming 1996’s The Stunt Woman when both “an existential depression” and warnings from some of her friends had her considering leaving acting. On a trip to Hong Kong during this time, Tarantino persistently bugged Yeoh’s people until the actress agreed to an audience. When he visited, Yeoh said, he completely geeked out, describing his favorite films of hers “framed by frame.” She said the conversation knocked her out of her funk and reminded her of what she loved about her work. 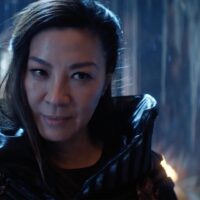