Michelle Pfeiffer has quite a bit of experience when it comes to comic book adaptations. After all, she starred as Selina Kyle aka the Catwoman in Time Burton’s 1992 film Batman Returns, opening the eyes of the world to a dramatic new take on the character and the possibilities of stitched-together vinyl. So when Disney came calling and offered her the role of Janet Van Dyne aka The Wasp (version 1.0), it was an easy decision on their part. However, Pfeiffer told Jimmy Fallon on an episode of The Tonight Show that it was not that simple for her and that she almost turned down the role of the woman who survived the quantum realm. The reason? They would not give her a script.

If it seems a little weird that one of the biggest movie studios in the world would not show even a legendary actor like Michelle Pfeiffer the actual material she would be expected to play in a high-profile movie, you must not be aware of how paranoid Disney is about spoilers. Pfeiffer went on to tell Jimmy Fallon that if Marvel Studios wants you for a role, you pretty much have to commit to it without knowing anything, take it or leave it. Clearly, Pfeiffer decided to take it and we had the heartwarming sight of Hope Van Dyne (Evangeline Lilly) reunited with her Wasp-mother after decades of separation. And also Paul Rudd and Michael Douglas were there too.

Apparently, Michelle Pfeiffer knows she has a bit of a tendency to be nervous to commit to a role. Ant-Man director Peyton Reed spoke to The Hollywood Reporter back in 2018, and told them that Pfeiffer had warned him that she was almost definitely going to get cold feet and try to back out of the project, and that she does that in basically every role. It seems that Pfeiffer manages to work her way through the jitters, or has people around her that are very good at it, which we all should be grateful for.

Michelle Pfeiffer broke out to audiences co-starring with Al Pacino in Brian De Palma’s iconic 1983 dorm room poster Scarface. Through the 1980s, she would appear in a number of well-regarded films like Richard Donner’s Ladyhawke (she was both the lady and the hawk), George Miller’s The Witches of Eastwick (as one of the witches), and Jonathan Demme’s Married to the Mob (in which she was married to the mob). Batman Returns brought her to a new level of fame, which she followed up with turns in the Martin Scorsese period piece The Age of Innocence and the leading role in Dangerous Minds, where she crossed her arms firmly.

In recent years, Michelle Pfeiffer has returned to starring roles. In 2017, she was part of the ensemble of Kenneth Branagh’s Agatha Christie adaptation Murder on the Orient Express (helping to kick off the Poirotverse) and played an evil queen in Angelina Jolie’s Maleficent: Mistress of Evil. Unless she gets really cold feet soon, Michelle Pfeiffer is set to reprise the role of Janet Van Dyne in 2023 with Ant-Man and the Wasp: Quantumania. 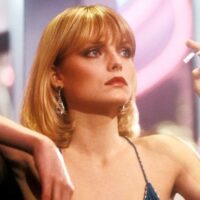