Michael Dorn Trying To Get A Star Trek TV Show Made

Actor Michael Dorn debuted as Worf in the Star Trek universe in the premiere episode of Star Trek: The Next Generation in 1987. Since then, Dorn has made more appearances as a regular cast member than any other actor in Star Trek history. Dorn has appeared in multiple Star Trek films, television series, and video games. While Dorn hasn’t played Worf since the 2002 movie, Star Trek: Nemesis, the actor states that he’s been trying to get a Worf TV show made.

Michael Dorn originally said that he wanted to make a Captain Worf series almost a decade ago, and the actor has apparently been trying to make this project come to fruition since. In an interview with Salon, Dorn stated that he’s been trying to pitch the Worf series for quite some time, and he believes CBS is “missing out on a golden moment and an easy sell. Dorn also states that despite his long history with Star Trek, he has not been contacted about potentially appearing in Picard.

With no new Star Trek films since 2016’s Star Trek Beyond, CBS does seem to have shifted to focusing on television with the brand. In recent years, CBS has revamped the Star Trek brand with the series Star Trek: Discovery, the short anthology series Star Trek: Short Treks, the Star Trek: The Next Generation sequel series Picard, and the animated series Lower Decks. Even with these new shows, CBS has shown they have a reverence for the past, as many characters from previous films and television shows have appeared in these new series. Considering Michael Dorn’s legacy as Worf, it’s surprising that the actor hasn’t at least been asked to appear on Picard.

But despite already having a ton of new Star Trek shows, CBS shows no tendency to slow down any time soon. A new animated children’s series called Prodigy is expected to debut in 2021 on Nickelodeon, while the upcoming Star Trek: Strange New Worlds will be a spinoff starring several characters from Star Trek: Discovery. There is also another new series being planned that is to be set at Starfleet Academy from Gossip Girl and The O.C.’s Stephanie Savage and Josh Schwartz, and Ceti Alpha V, a limited series that centers around the character of Khan Noonien Singh. With CBS pumping out Star Trek content, it’s strange Michael Dorn’s proposed Worf series hasn’t been picked up.

Yet even though Michael Dorn hasn’t appeared in a Star Trek property for almost two decades, the actor has kept busy. The actor just released his newest film, Agent Revelation, which puts the actor into another sci-fi world. In recent years, Dorn has done quite a bit of voice work for shows like The Lion Guard, Arrow, Supergirl, and Teenage Mutant Ninja Turtles.

CBS clearly has an interest in keeping Star Trek fans happy, and by feeding into the nostalgia of past characters in the Star Trek universe, they’ve been able to create new shows that also utilize characters from the vast history of the brand. Even if Michael Dorn isn’t currently working with CBS on a Captain Worf show, or even a cameo in one of their other shows, it seems like only a matter of time before Worf appears in some form. 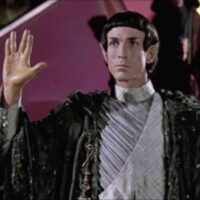