The Arrowverse might be all but gone, but there is some rumors circling that Melissa Benoist could be expressing interest to return to Supergirl.

After The CW, Warner Bros Television, and Berlanti Productions announced that Supergirl would not be renewed after its sixth season aired in 2021, Melissa Benoist took some much-needed time away from the cameras. But now it seems like the 33-year-old is ready to suit up as the Kryptonian one more time. The news was revealed at this year’s Canadian Fan Expo when Superman & Lois stars Tyler Hoechlin and Elizabeth Tulloch were asked if there are any plans to have Kara appear in the series.

While Hoechlin gushed about his on-screen cousin, Tulloch revealed that Melissa Benoist has considered returning to the role. “She has expressed interest to me in doing it,” she told the crowd at the event. “I know that we would love to work with her again and Grant [Gustin] and everyone else.” But she also explained that due to the pandemic, it might not be possible. “Ever since we started the show, Covid has been a reality which is why we haven’t done any of the crossovers or anything like that. So we just can’t speak to whether or not that’s feasible,” she said.

Will Melissa Benoist’s Supergirl return to Superman & Lois? See what the show’s stars say below:

While fans would definitely love to see Melissa Benoist reprise her role as the beloved superhero, she might not be the same Kara Danvers viewers got to know over six years. And here’s why… Although Superman & Lois was developed as a Supergirl spinoff, the first season didn’t reference any of the Arrowverse heroes. Since Kara is Clark Kent’s last remaining blood relative, the lack of mentions made folks question what was going on. It wasn’t until the season two finale that the writers dropped a major plot twist, saying Superman & Lois isn’t set on Earth-Prime.

Instead, the characters viewers tune in to watch are simply their doppelgangers that exist on an undesignated Earth in the Multiverse. This means the Superman and Lois that were created in the Arrowverse franchise are entirely unrelated to anything in the spin-off series. However, following the revelation, series co-creator and showrunner Todd Helbing said he knows how he would introduce Melissa Benoist into this new universe. Speaking to The Flash Podcast, he said the actress would just be a different version of the Girl of Steel.

“It would not be the Supergirl from the Arrowverse,” he told listeners. “It would be our version so we would invent a new back story for her, the same way that we did with Lucy Lane, General Lane, and John Diggle.” He added that although Melissa Benoist may look the same, her inclusion would come with a completely different story. For now, there has been no official indication that the new season of Superman & Lois will feature Supergirl in any capacity Production on the latest installment is scheduled to start next week.

Meanwhile, Melissa Benoist is currently working on a new series called Girls on the Bus for HBO Max, Deadline reports. Written by Amy Chozick and Julie Plec, the show is inspired by a chapter in Chozick’s book Chasing Hillary. The story centers on Sadie McCarthy (Benoist), a journalist who romanticizes the Tim Crouse book The Boys on the Bus, and who scrapped her whole life for her own shot at covering a presidential campaign for the paper of record. 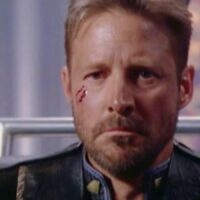