First Look At Mechagodzilla In Godzilla vs. Kong

If you look up the description for Godzilla vs. Kong, you’ll find no mention of Mechagodzilla. However, if the studio is trying to keep the character’s appearance quiet they’re doing a terrible job of it. Back in January, there was a toy leak that suggested Mechagodzilla will be in the upcoming movie. Now, merchandise has leaked with our first look at the iconic character. Mechagodzilla has never been in an American production of a MonsterVerse movie before, so this is a historic moment for the franchise.

The weaponized look of the spine of Mechagodzilla’s tail is a nice touch here. We’ve seen versions of this character in the Japanese Toho movies where he is a shiny aluminum and stands up straight. We’ve also seen a take on the character in Ready Player One. In the Godzilla vs. Kong peek here, he’s bent forward and more dangerous looking. He has a classic predator bent, with a gritty and dangerous look to his mechanical body.

In the trailer for Godzilla vs. Kong, we learned that things seem pretty tense for the title characters. Godzilla is fairly terrifying. While we don’t seem to know what has upset Godzilla, the monster seems bent on destroying everything it can. Kong appears to be humanity’s only hope. While Kong is shown leaping to the challenge, we also see a lot of humans discussing how scared they are of Godzilla at this time. There seems no better movie to finally introduce the horror of Mechagodzilla.

We’ve waited to see Mechagodzilla join the franchise for a while. Getting the rights to the character has been expensive. It’s been rumored that this has held the movies up from including Mechagodzilla in the past. Hopefully, fans and leaks are correct and Godzilla vs. Kong will include the iconic monster.

The character’s origins have been a bit different in the various Toho movies, so it will be interesting to see how Godzilla vs. Kong handles Mechagodzilla in this first American movie. In the Japanese films, it first appeared in 1974. The character was created on an alien planet and sent to destroy Earth. There have been other incarnations where humans on Earth created Mechagodzilla. The character is one of Godzilla’s greatest enemies. Based on the trailer for Godzilla vs. Kong, it would make sense for the humans to enlist Mechagodzilla now to help stop Godzilla. Perhaps the humans will be his creator?

It’s surprising at this point that the studio has yet to confirm Mechagodzilla is in the movie. Godzilla vs. Kong releases at the end of March. Wouldn’t Mechagodzilla be something you want to show off in the promotional materials for the movie? Are they waiting for the movie to come out and let fans build up hype about the new character on their own? It’s hard to break down the marketing thinking here, but the building evidence that Mechagodzilla is in the movie will make it a letdown if he doesn’t appear.

We won’t have long to wait to find out. Godzilla vs. Kong will release on HBO Max and in movie theaters on March 31, 2021. 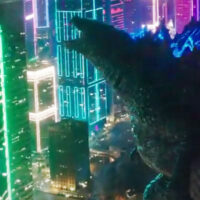 Leaked Look At Mechagodzilla In Godzilla Vs. Kong