Will Poulter has just joined the MCU, but he has some choice comments about the training that he must be put through to get ready to portray Adam Warlock in the upcoming Guardians of the Galaxy Vol. 3 film. Warlock is a known magic-user in Marvel’s continuity, but he is also a hero that is in ridiculous shape. Poulter commented on the fact that the Marvel heroes that have appeared in films have a bit of an unhealthy and unrealistic body shape. According to the actor, “But the most important thing is that your mental and physical health has to be number one, and the aesthetic goals have to be secondary. Otherwise, you end up promoting something that is unhealthy and unrealistic if you don’t have the financial backing of a studio paying for your meals and training. I’m in a very privileged position in that respect, and I wouldn’t recommend anyone do what I did to get ready for that job.”

Will Poulter also described the discipline that must be achieved by sticking to a strict diet. He spoke about his absence of food and overeating food. He also stated that he has not had a drop of alcohol since New Year’s Eve. Clearly, the man is likely wanting to just take it easy and have a drink or two. To be honest, this is all for him to become arguably one of the biggest characters in Marvel’s continuity. Adam Warlock is a
God, essentially, and he gets the honor of portraying this overpowered hero. Warlock might pop into plenty of other films and shows within the MCU. Though the diet does sound a bit unrealistic, especially to those who don’t have access to these dieticians, he is still going through all this pain for a strong reason. He will be forever cemented into the MCU and heralded by fans everywhere.

Actors often have to get in great shape when it comes to the roles they are cast in. Will Poulter has certainly discovered that now that he is going to presumably be a fixture in the MCU. Fans have long been waiting for Adam Warlock to make his appearance, and he had, but only briefly. At the conclusion of the first Guardians of the Galaxy film, a post-credits scene showed the cocoon that housed Warlock, but the powerful hero was never shown. Now he is set to burst his way into the third film, and presumably into many more MCU entries in the future.

The Guardians of the Galaxy group will appear in a holiday special for Disney+, which director James Gunn has already explained will be significant. Will Poulter could theoretically appear in that special, and then have a more expanded role in the third film, as Gunn revealed important events will happen during that film. The Sovereign did create Warlock to get back at the Guardians of the Galaxy, so it could be that the character is meant to be a villain in the beginning and might want to ruin their Christmas. He is generally a good character in the comics but possesses an ego that has him be a bit of an anti-hero of sorts. He is an artificially created being too, so emotionality isn’t exactly his forte. It’s going to be interesting how Poulter portrays him, despite the harrowing diets and discipline he has had to deal with. At least the studio is paying for the man to get into shape, otherwise, that would be far worse. 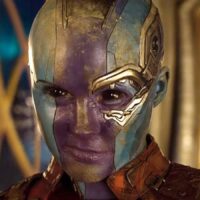