13 Going on 30 is an iconic film for many reasons. Not least of all because those who watched it as teens have now surpassed the age of 30. One of the most memorable moments from the film is the “Thriller” flash-mob dance scene. However, according to CinemaBlend, that very scene almost caused Mark Ruffalo to walk out on the movie.

Yes, before Mark Ruffalo was the big green Hulking Avenger, he was turning heads as a rom-com heartthrob. His character Matty’s relationship with Jennifer Garner’s Jenna is the backbone of 13 Going on 30 and has forever endeared Ruffalo to fans of the film, but things could have ended very differently. The news broke on CinemaBlend’s very own Podcast, Reelblend. Both Mark Ruffalo and Jennifer Garner were on the weekly show promoting their new Netflix Movie The Adam Project when co-host of ReelBlend Kevin McCarthy brought up the iconic flashmob “Thriller” scene.

Kevin McCarthy is a self-confessing 13 Going on 30 fan and has a particular fondness of the “Thriller” dance scene and posed to Mark Ruffalo what his memories of the scene were. As it turns out, the Avengers star didn’t have fond memories of shooting that scene; “Whatever Matty was experiencing in that was actually just me. [Jennifer Garner] had to drag me onto the dance floor. It took me six hours to learn what she learned in about six minutes. She was so good at dancing, and I was so bad… I almost quit the movie.”

For those thinking that Mark Ruffalo is bluffing, think again. His co-star past and present Jennifer Garner was quick to reaffirm the actor’s temptation of quitting the beloved film; “We had to talk him into staying. We had done all this rehearsal, and then we finally rehearsed the dance and he was just like, ‘This isn’t for me. I’m not doing it.'”

Thank God Mark Ruffalo was persuaded to stay on to help enshrine 13 Going on 30 into the Romantic-Comedy hall of fame. The film recently celebrated its eighteenth anniversary. To mark the occasion and to help promote The Adam Project, both Ruffalo and Garner recreated an iconic scene from the movie. Relaxing on a cream coloured couch, just the same as the final scene of the movie, when Jenna and Matty relax as newlyweds. The cute reimagining of that iconic scene was posted by Mark Ruffalo on Instagram.

In the clip, Mark Ruffalo jokingly quips it’s as if Jenna and Matty grew up to become Adam’s parents in The Adam Project. The pair are then joined by the young star of The Adam Project, Walker Scobell. Scobell teases and taunts Ruffalo about how long it’s been since 13 Going on 30 was released, much to Ruffalo’s distaste. If an eighteen year anniversary of the rom-com isn’t enough to make Ruffalo and others feel old, then the following news will. Last November, the star who played thirteen-year-old Jenna, Christa B. Allen turned thirty herself!

Beyond reminiscing about past Rom-Coms and promoting a new Netflix feature, Mark Ruffalo is also gearing up to promote a return to one of his other iconic roles — The Incredible Hulk. Ruffalo will be once again be playing Dr Bruce Banner in the upcoming Disney Plus series She-Hulk. The series stars Tatiana Maslany as Jennifer Walters, the eponymous hero. Walters is the cousin of Bruce Banner, hence Ruffalo’s involvement in the series. Also returning to the fore is Tim Roth as Abomination and it has also been reported that Charlie Cox’s Daredevil will also be making an appearance. The series is set to debut on the streamer this coming Fall. 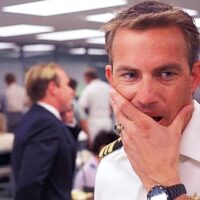