If you’ve seen Martin Scorcese’s The Wolf of Wall Street, then you know that Margot Robbie is undoubtedly one of the best parts of the movie. As Naomi Lapaglia aka “The Duchess,” she was able to command any scene she was in. However, it wasn’t all glitz and glamor despite what you see on-screen. In a previous interview with The Daily Beast, Robbie told the story of what happened when they filmed the scene where she and Leonardo DiCaprio’s Jordan Belfort have sex on top of a pile of money. Apparently, the fake money ended up giving Robbie a ton of papercuts on her back, making it an unpleasant scene to film.

So, it seems like if you ever get the chance to have sex on a pile of money, whether it’s real or fake, Margot Robbie might suggest foregoing the opportunity. Seems like good enough advice to me. While Margot Robbie had some small roles on TV shows and movies before playing Naomi Lapaglia, The Wolf of Wall Street was the Australian actress’s introduction to the mainstream. Her magnetic presence and talent in the movie helped to launch her as one of the most well-known actors working today.

After The Wolf of Wall Street, Margot Robbie would go on to get Oscar nominations for her roles in movies like I, Tonya, and Bombshell. She would also join the superhero movie phenom by playing DC’s sometimes villainous Harley Quinn in various movies. We should be seeing her reprise her role again in the recently announced Gotham City Sirens, which has no set release date at this time. James Gunn’s The Suicide Squad is the last time we saw Robbie in a movie, but she has another two movies expected to come out before the end of the year, so we have a lot more to look forward to.

We should see Margot Robbie light up the silver screen again in November, with David O. Russel’s Amsterdam. Amsterdam is a movie set in the 1930s where three friends witness a murder, become suspects, and uncover an outrageous plot. The cast for this one is absolutely stacked, with Christian Bale, John David Washington, Anya Taylor-Joy, Mike Meyers, Zoe Saldana, Robert De Niro, Rami Malek, Timothy Olyphant, Michael Shannon, Chris Rock, and even Taylor Swift on board.

After Amsterdam, we should be seeing Margot Robbie in the next Wes Anderson flick, Asteroid City. The plot is rumored to be a love story in Europe. Once again, the cast is stacked from top to bottom with Tom Hanks, Rubert Friend, Scarlett Johansson, Bryan Cranston, Bill Murray, Jeffrey Wright, Tilda Swinton, Adrien Brody, Jeff Goldblum, and more all set to star.

Once the New Year starts, we won’t even have to wait a week to see her in Damien Chazelle’s Babylon, which stars Brad Pitt, Olivia Wilde, Tobey Maguire, Eric Roberts, Jean Smart, and more. In short, we have a lot of Margot Robbie projects to look forward to in the future. Hopefully, the only piles of money she’ll have to deal with are the ones she’ll get for starring in these films. 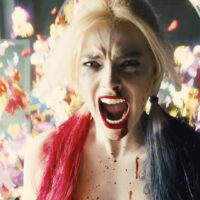