Mank, director David Fincher’s first film since 2014’s Gone Girl, has just received its first official trailer, in a look at the creation of the greatest film ever made.

In this first Mank trailer, Mankiewicz is told that his screenplay for Citizen Kane is “a bit of a jumble, a collection of fragments that leap around in time like Mexican jumping beans.” Infamously, Citizen Kane begins with the death of lead character Charles Foster Cane, then goes back-and-forth throughout the character’s life, as Kane’s story is told in flashbacks and through the perspective of Kane’s closest friends.

Oscar-winner Gary Oldman plays Herman J. Mankiewicz – “Mank” for short – a former writer for The New Yorker and New York Times who became one of the first print writers to shift to film. Mankiewicz was hired by Orson Welles to write a film about the life of William Randolph Hearst, a film that would become known as Citizen Kane. In Mank, Fincher shows 1930s Hollywood, Mankiewicz’s friendship with Hearst, and the looming specter of Orson Welles that is just one of many things that haunts Mankiewicz as he tries to complete his most important work.

The same is true of this Mank trailer, which shows Oldman’s Mankiewicz struggling to stay afloat, as love, alcohol, and his impending deadline hanging over his head. At least with this trailer, Fincher seems to be playing with the same type of structure that Welles used in Citizen Kane, which here, is used to put the audience in the disorienting position of Mankiewicz and all of his many vices.

Mank seems to focus on Mankiewicz’s relationship with William Randolph Hurst (Charles Dance), the inspiration for Charles Foster Kane. It looks as though Fincher will show how this friendship helped Mankiewicz bring together the world of Citizen Kane. For example, Amanda Seyfriend plays Marion Davies, who was Hearst’s mistress. In Citizen Kane, Kane’s second wife is supposedly heavily inspired by Hearst’s relationship with Davies.

Despite Mank’s difficulties in writing Citizen Kane, the film and screenplay are considered some of the greatest ever made. Even though Citizen Kane was nominated for nine Oscars at the 1942 Academy Awards, the only win for the film was for Best Writing, Original Screenplay, which went to both Mankiewicz and Welles. Neither Mankiewicz nor Welles appeared at the ceremony.

As a screenwriter, Mank’s talents stretched far beyond Citizen Kane. Mankiewicz is known to have worked on such films as The Wizard of Oz, Dinner at Eight, Pride of the Yankees, and as a producer, he worked with the Marx Brothers on such films as Monkey Business and Horse Feathers.

Over the years, the greatness of Citizen Kane and Mank’s contributions to the world of film has only increased. In both 1998 and 2007, the American Film Institute proclaimed Citizen Kane as the greatest American film ever made. In Sight & Sound’s Top Ten films survey, which is done every decade, Citizen Kane claimed the prize every decade starting in 1962 and was only displaced by Vertigo in 2012. The Writers Guild of America West called Mank’s screenplay the fourth greatest screenplay, behind only Casablanca, The Godfather, and Chinatown. Roger Ebert has said Citizen Kane is the greatest film ever made. Ebert has also said, “People don’t always ask about the greatest film. They ask, ‘What’s your favorite movie?’ Again, I always answer with Citizen Kane.”

Fincher has a lot to live up to with Mank, a film he’s been working on since at least 1997. But if anyone can bring the majesty and insanity of the people who inspired and made Citizen Kane, it’s almost certainly him. Fincher’s The Social Network writer Aaron Sorkin has already said of Mank, “It’s breathtaking even by David Fincher standards.” While Fincher hasn’t made a film since Gone Girl in 2014, he has since directed several episodes of the Netflix serial killer series Manhunter.

There isn’t much longer to wait for Fincher’s passion project, as Mank will be released in select theaters in November, before its release on Netflix on December 4. 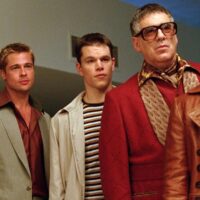 Netflix Is About To Lose All Of These Movies in November