A Classic Lucille Ball Movie Was Added To Netflix

Lucille Ball juggles love and twice the challenge of child-rearing in Yours, Mine and Ours, a charming domestic comedy about two extraordinarily large families coming together. Released in 1968 and directed by the legendary Melville Shavelson, it retells the true story of Frank and Helen Beardsley, a Carmel couple with 20 children. Frank had 8 from his previous marriages, while Helen had 10. They adopted each other’s kids, and eventually shared two. Lucille Ball and Henry Fonda play the lead roles. The film was recently added to Netflix.

Henry Fonda switches out his cowboy hat (in Welcome to Hard Times) for the spotless white tunic of Navy man Frank Beardsley. He’s a project officer assigned to develop the Fresnel lens glide-slope indicator, technology used to guide ships past lighthouses, for aircraft carriers. He meets Lucille Ball as Helen North, a civilian nurse while reporting at NAS Alameda, a naval air station off the coast of San Francisco Bay. The lovebirds cross paths twice while serving at the base: first while dining at the commissary and another at the dispensary, when Frank’s daughter unexpectedly falls ill. Smitten, the pair starts dating.

It doesn’t take long for either family secret to emerge. Turns out Henry Fonda’s Frank and Lucille Ball’s Helen are both widowed parents, to eight and 10 children, respectively. The news rightly puts a damper on their whirlwind romance. How could two people possibly raise 18 children without issue? The challenge is far too daunting, and Frank and Helen go their separate ways. Well-meaning friends, led by Frank’s Navy colleague Darrell Harrison (Van Johnson), hatch a scheme to bring the two back together; they set the nascent couple on especially off-putting blind dates in the same restaurant, at the same time, so both would realize how well they had it — and it works like a charm. Frank and Helen ditch their would-be suitors and go home together.

Frank soon invites Helen to meet his children, but his boys respond poorly and spike her drink with alcohol. Lucille Ball plays the part of delectably uncultured drunk to a tee. Made astute by his time serving in the Navy, Frank picks up on the miscreants right away; he sits his three sons down and forces them to apologize for the prank. Determined to win his children’s approval, Frank calls for a heart-to-heart and announces he is marrying Helen.

As expected, the decision doesn’t sit right with any of the kids, including Helen’s. Many a bickering later, Helen becomes pregnant with Frank’s child, Joseph John Beardsley, and the two families make amends in celebration of the new baby. The previously beleaguered couple marry and the blended family move together to a new home. The idea of cross-adopting initially horrifies the children, remembering their own fathers, but readily conciliate for the benefit of their new brother. The kids eventually take on Frank’s last name of Beardsley as the eldest, Mike, is shipped off to Camp Pendleton to become a United States Marine.

Yours, Mine and Ours was a colossal box office hit when it hit theaters in 1968. The film earned $25.9 million and another $11 million in video rentals. It was the highest-grossing movie of that year. Frank and Helen Beardsley adored Henry Fonda and Lucille Ball’s big-screen adaptation of their life story, despite it not being particularly accurate about the facts. In reality, the Beardsley children hardly protested the marriage; the only people who contested the decision were the Norths, the surviving family of Helen’s deceased ex-husband Richard, and several magazine readers who got wind of the Beardsleys’ bizarre situation. Blended families this large weren’t received well by most people of that era, and criticisms abound.

The film was originally called The Beardsley Story, then Full House and His, Hers and Theirs, before finally settling on Yours, Mine and Ours. Madelyn Pugh and Bob Carroll were in charge of adapting the Beardsleys’ love story, but failed to impress Lucille Ball, who found the script’s uncanny resemblance to I Love Lucy, a sitcom she, Pugh, and Carroll were involved in, unpleasant and needlessly ingratiating.

Many scenes were completely made-up and didn’t match the Beardsleys’ real-world romance at all. It was the usual Hollywood cramp; the duo had sacrificed quality and accuracy for cheap laughs. Several new writers were hired to revamp the screenplay, but it was only after Melville Shavelson was tapped to co-write and direct that the project finally got going. Shavelson reworked the script with Mort Lachman, and production commenced right away. The cast and crew filmed the movie in Alameda and San Francisco, California. Helen Beardsley’s family autobiography, Who Gets The Drumstick?, released midway through principal photography in 1965. The film was remade in 2005 by Raja Gosnell (The Smurfs) and starred Dennis Quaid as Frank and Rene Russo as Helen.

Analysts attributed the movie’s financial success to the strength of Lucille Ball’s star power and charisma. Ball was one of Hollywood’s most sought after actresses when Yours, Mine and Ours premiered in 1968, having been nominated for (and received) a slew of awards for her turn as Lucille “Lucy” Carmichael, a New York City housewife living in postwar America. Ball played Lucy opposite real-life husband Desi Arnaz in CBS sitcoms I Love Lucy and its followup, The Lucy Show, upon which some of the gags on Yours, Mine and Ours were based.

Lucille Ball was one of few actors who received two stars on the Hollywood Walk of Fame and was honored five times by industry stalwarts before her death in 1989: the Women in Film Crystal Award in 1977, the Golden Globe Cecil B. DeMille Award in 1979, the Television Hall of Fame in 1984, the Kennedy Center Honors Lifetime Achievement Award in 1986, and the Academy of Television Arts & Sciences Governors Award in 1989, the year she passed. She was posthumously awarded The Women’s International Center’s Living Legacy Award, as well as the Presidential Medal of Freedom in July 6 of the same year by former president George H. W. Bush.

She was also the first woman to head her own movie studio, Desilu Productions, which endures to this day. The studio notably produced the first two seasons of Star Trek. Now renamed Paramount Television, Desilu was once the second-largest independent film company in the whole of the United States. Nicole Kidman will be playing Lucille Ball in Being The Ricardos, an upcoming biopic about the life and career of the four-time Emmy winner. Cate Blanchett was previously tied to the project. Aaron Sorkin (The Social Network, Steve Jobs, The Trial of the Chicago 7) is writing and directing.

Lucille Ball’s last film appearance was a CBS television movie entitled Stone Pillow, about an elderly former actress hoping to regain her lost star. Ball was 74 when she played the lead role of Florabelle in 1985. Lucille Ball died from a ruptured abdominal aortic aneurysm in the early hours of April 26, 1989, after battling successive heart issues since April 18. She was 77 years old. 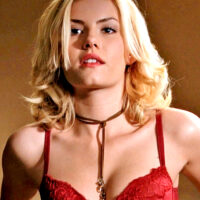