Everyone is patiently waiting to see his new Lord of the Rings prequel series on Amazon Prime Video, and updates have been dropping every so often. What is most intriguing is how the streaming platform is going to handle the most expensive television series ever made. Mainly, what is everything going to look like with that amount of money thrown out? Well, now we have been given the first look at what Orcs will look like in this new series. Honestly, they look frightening. You can see the first-look images below:

Considering that this new Lord of the Rings series takes place thousands of years before the films do, it is interesting to see how the Orcs look. This new series is meant to tackle the second age of man, which is some 3,400 years before the events of The Fellowship of the Ring take place. One thing of note from the above pics is that these Orcs seem to look more earthy. What we mean by that is that their armor is pulled directly from sources that are from the earth. It appears they have armor made from wood and bone. That would make considering that tempering steel or some such thing might not have been as advanced during the time the first movies took place.

Lord of the Rings has had expansive lore that covers thousands of years and thousands of characters, races, locations, and so forth. It is great to see the detail that is being taken with showing how the Orcs looked in an older time. It will be interesting to see if this new series plans to bring in the Uruk-Hai, but these strong orcs might have only been bred by Saruman in the older age of Middle Earth. Either way, Orcs will always be one of the most formidable opponents in the franchise. Or at the very least, they are some of the most used pawns by Sauron, who is going to be the main antagonist in the prequel series. This time, he is not going to be a giant floating eye though.

Lord of the Rings: The Rings of Power is set to debut on Amazon Prime Video on September 2nd, and fans are already impatiently waiting to see the series. We are too. We want to see what the series will bring in terms of some of the classic characters we were only shown for a brief period in the original films. One such classic character is Galadriel, who was portrayed by Cate Blanchett in the original trilogy. Now the role is being taken on by Morfydd Clark.

The Lord of the Rings: The Rings of Power will showcase an era that was only written about in the books, and not shown on screens just yet. We can’t wait to see how everything else looks. So far, Sauron’s hand has been shown on a poster, but now what he looks like in that age. There is a ton of hope though, considering how good the Orcs look in the above photos. We hope to see a magnanimous-looking Sauron. 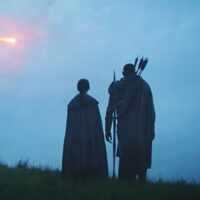 Lord Of The Rings: The Rings Of Power Trailer Reveals Sauron, See The First Look