Rest easy, action fans. The actor with the “particular set of skills” isn’t calling it quits just yet. Liam Neeson is clarifying past statements he made in which he claimed he was retiring from action films. As it turns out, the man is so serious, no one realized he was making a joke. Thankfully, the 69-year-old actor plans on continuing to kick ass and take names for years to come.

While on a press tour for his latest action flick, Memory, Liam Neeson was reminded by The New York Post that he had claimed recently that he was done with action films. With Memory hitting theaters on April 29, and several more action films already completed and in post-production, Neeson made it clear he has no intention of retiring anytime soon. “That was a joke. That was at the Toronto Film Festival a few years ago,” he said of his past comments. “One of the Hollywood Foreign Press said, ‘Liam, what is it with you and these action movies?’ I said, ‘I’ve had enough of action movies.’ But I meant it as a joke.”

That wasn’t the first time Liam Neeson has teased his retirement, however. We reported just a year ago that he could see the end of his action career coming. “Oh, yeah. I think so. I’m 68 and a half. 69 this year. There’s a couple more I’m going to do this year — hopefully, COVID allowing us — there’s a couple in the pipeline and, then I think that will probably be it,” he told Entertainment Tonight Online. It didn’t seem like he was joking then, but he may have had a change of heart soon after, considering he hasn’t stopped making action flicks. He has several films in the bag and nearing release: Retribution (from Predators and Stranger Things director Nimród Antal) and Marlowe (in which he plays legendary detective Philip Marlowe). He’s also about to film another action flick, In the Land of Saints and Sinners, and Taken 4 is reportedly in development, so he’s not exactly slowing down and hitting the golf course.

That’s good news for action film fans, and it still gives hope to Star Wars fans that somehow, he’ll return to play Jedi Master Qui-Gon Jinn. Liam Neeson admits he would be open to reprising the role, under one condition. “I think so, yeah, if it was a film,” he says of returning to Star Wars. “I’m a bit of a snob when it comes to TV, I must admit, I just like the big screen, you know?” That effectively kills any speculation that he’ll appear in the upcoming Disney+ series Obi-Wan Kenobi, with Ewan McGregor returning in the role. That means no “Force Ghost” Qui-Gon, or a flashback scene with Neeson de-aged with CGI.

With classic action films like Taken, The Grey, The Commuter, and Non-Stop under his belt, there’s not much more for Liam Neeson to prove. His latest film does, at least, acknowledge his age. Memory tells the story of an assassin who begins to experience memory loss.

Although he might, at some point, retire from action films, he would likely continue acting in general. The Oscar-nominated Liam Neeson (Schindler’s List) has made the occasional comedy, and still delves into drama. He also has pretty active voice-over career: he most notably voiced Aslan in the Chronicles of Narnia series and even appeared on Family Guy. 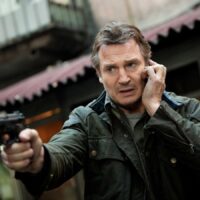 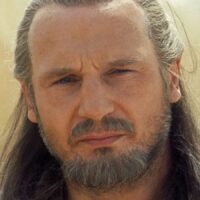