It’s been just a little over a week since the death of Jeopardy! host Alex Trebek, yet people are already theorizing who will take the game show host’s place. Ever since Trebek revealed that he had been diagnosed with cancer, the question has been one that many Jeopardy! fans have been curious about. Yet a new petition with over 87,000 signers is pushing for LeVar Burton to be the new host of Jeopardy!

The petition, which is addressed to Sony Pictures Entertainment Inc. and Jeopardy! producers Mike Richards and Harry Friedman, states that LeVar Burton has been an icon for learning and education after hosting Reading Rainbow for 21 seasons. Not only that, but playing iconic characters like Geordi La Forge on Star Trek: The Next Generation and Kunta Kinte in Roots makes Burton a personality that people know and love.

In recent years, LeVar Burton has been a part of several different educational programs, including narrating an episode of the Netflix documentary series Explained in 2018, appearing on the YouTube channel SciShow, and starting his own podcast, LeVar Burton Reads, in which Burton reads a new short story.

But like Alex Trebek, LeVar Burton doesn’t have a problem with poking fun of himself. Burton notoriously appeared as himself on Community, as well as on The Big Bang Theory, Tim and Eric Awesome Show, Great Job!, and even earlier this month on The Eric Andre Show.

In the last few years, LeVar Burton has also been quite an active director in television. Between 2017 and 2020, Burton has directed eight episodes of NCIS: New Orleans, and two episodes of the ABC series Perception. Burton is currently on the board of directors with the Directors Guild of America.

In the past, LeVar Burton has directed multiple episodes of Star Trek: The Next Generation, Star Trek: Deep Space Nine, Star Trek: Voyager, and Star Trek: Enterprise as well as the Disney Channel original movie Smart House, and the Christmas comedy Blizzard. Burton is also scheduled to direct Two-Front War, a documentary series about black soldiers in Vietnam.

However for many fans of Jeopardy!, it seems Alex Trebek is inseparable from the show, regardless of how great LeVar Burton might be as host. In a poll from Morning Consult soon after Trebek revealed his cancer diagnosis in 2019, 50% of those polled said that they couldn’t imagine watching Jeopardy! without Trebek as the host. 70% of people polled said that Jeopardy! was inseparable from its current host.

Yet recently, it has seemed like the most logical person to take Alex Trebek’s place isn’t LeVar Burton, but former Jeopardy! winner, Ken Jennings. Earlier this year, Jennings won the Jeopardy! Greatest of All Time tournament against other famous winners, James Holzhauer and Brad Rutter. Jennings first gained notoriety after winning 74 games in a row, and is arguably the most well-known personality tied to Jeopardy! after Trebek. In September, Jeopardy! even hired Jennings as a consulting producer for the show.

When asked who he would like to replace him, Alex Trebek made it clear that he would not be a part of the discussion, but that he would leave that to the show’s producers. However, Trebek did give a few hints over the years as to who he would not mind seeing as his replacement. In 2018, on the show OBJECTified, hosted by TMZ founder Harvey Levin, Trebek threw out a few names. His first suggestion was Alex Faust, the announcer for the Los Angeles Kings, as well as Turner Classic Movies host Ben Mankiewicz. Trebek also suggested Laura Coates, who is an attorney and CNN legal analyst. While Trebek never mentioned LeVar Burton as the potential new host, it seems likely he would have liked the choice.

But whether the next host of Jeopardy! is LeVar Burton, Ken Jennings, or someone else entirely, they’re going to have some huge shoes to fill behind that podium. 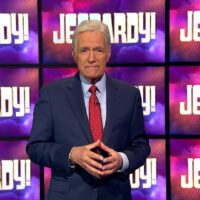 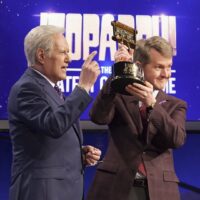