Don’t Look Up was released in December of 2021 and has already turned into the second-biggest release in Netflix’s history. That might be due to the fact that the cast of the film includes Leonardo DiCaprio, Jennifer Lawrence, Meryl Streep, Cate Blanchett, and Jonah Hill. The film was thought up by dark comedy director Adam McKay and certainly delivers on the emotional payloads while also providing some very hilarious laughs. In the film, Leonardo DiCaprio and Jennifer Lawrence, who play two scientists, try and tell the world about a catastrophic event. It’s now been revealed that the final line of the film was thought up by DiCaprio. The final line says “we really did have everything, didn’t we?”

The crucial line delivered at the most dramatic point in the film definitely hit hard, and the fact that Leonardo DiCaprio came up with that line means that he knows exactly the responsibilities of the role that he was given. Don’t Look Up has plenty of layers when thinking about the overall themes of the film. When a meteor is set to destroy the Earth and the nation’s and world’s top scientific minds cannot break through the craziness of social media to convince people of their impending doom, it paints a picture about the real world that we are currently living in. The line delivered by DiCaprio’s character is meant to be the final dramatic moment when a family and close friends are gathered and eating dinner right before they are blown away by the meteor’s impact. The entire scene is powerful in that they all pretend like this is not happening.

Adam McKay is known for making films that bring forth humor, but also make people think about the damage of certain situations. That was certainly the case for The Big Short, which followed the housing crisis from 2007-2008, and how insiders allegedly knew what was going to happen and made millions off a massive financial crisis in the US. The same thing is certainly happening in Don’t Look Up when the scientists played by Leonardo DiCaprio and Jennifer Lawrence are essentially laughed out of the White House when they inform the President of the United States that the world is going to end. The same happens when the pair also go on one of the most popular talk shows in the nation and are not taken seriously at all. DiCaprio becomes a sexual icon whereas Lawrence becomes a pariah.

The line that Leonardo DiCaprio came up with refers to society truly having so much but squandering it all. There are comparisons being made in the film to how the world sees climate change. You cannot change the world if you have already wrecked it beyond repair. The fact that they truly did “have everything” and watched the world come to end is truly heartbreaking. In the movie, all they had to do was to take the threat to the world seriously instead of allowing a mobile company conglomerate attempt to mine the asteroid for profit. There is a lot to unpack in the film and Don’t Look Up is currently streaming on Netflix. Watch and see why the film is #2 all-time on the streaming platform. 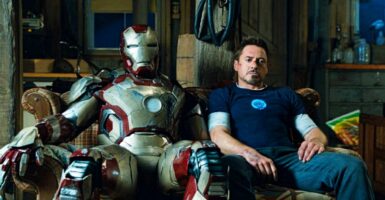 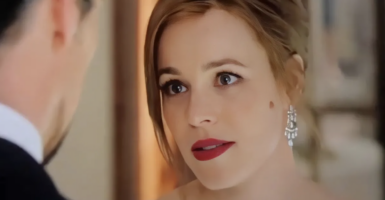