Fans of movies and shows, especially iconic ones can argue incessantly over what would have happened had a different actor or actress taken a certain role. It has always been a fun what-if of sorts, dreaming on how someone would have made a role different or maybe even better. And now, thanks to deepfake technology, we have the chance to actually what certain castings would have looked like. Recently, Collider posted a deepfake video that had Leonardo DiCaprio playing the role of Anakin Skywalker in the Star Wars prequel trilogy. And thanks to the tech, we can get him in all versions of the character, aging up as Anakin does as well.

The more than five-minute-long video walks us through the Anakin Skywalker timeline from The Phantom Menace all the way to the end of The Return of the Jedi. It is a masterful compilation that now puts Leonardo DiCaprio in every one of the roles, from the youngest version played in the movies by Jake Lloyd, then to the Hayden Christensen part, and finally, Sebastian Shaw who played the unmasked Vader at the end. Check out the video, and what Leonardo DiCaprio brings to the role.

Again, thanks to deepfake technology, we can now see Leonardo DiCaprio all the way through the timeline, even starting as a young child on Tatooine in the Mos Espa settlement. Though we have gotten used to the Jake Lloyd, kid version of the character, it is easy to see that a young DiCaprio work here in the role. As he ages, a teenage and older version of DiCaprio as Anakin is a nearly-perfect stand-in for Christensen in the role. And this name wasn’t pulled out of thin air either, with it having been reported that Leonardo DiCaprio originally turned down the role back in the early 2000s when George Lucas and company were casting for Attack of the Clones. DiCaprio has said that he met with Lucas at the time, and was offered the part, but wasn’t ready then to take it.

Leonardo DiCaprio isn’t the only actor or actress getting the deepfake treatment in the Star Wars universe either. There have been a number of different possibilities thrown out there over the last year or so. We had Sebastian Stan standing in for Mark Hamill as Luke Skywalker, something fans have wanted instead of a de-aged version we saw in The Mandalorian last season. There is still some chance we see the show go that route. And there was also Millie Bobby Brown looking the part of Princess Leia. Heck, deepfakes are becoming so popular that a popular YouTuber was even hired by LucasFilm because of the work he was doing in the space.

As for Leonardo DiCaprio, he isn’t set to join the Star Wars universe or franchise anytime soon. But he, of course, has plenty of work lined up for the next couple of years with some exciting projects on the way. He is teaming back up with Martin Scorcese for Killers of the Flower Moon. Plus there will be the series adaptation of The Devil in the White City in which he will play serial killer H.H. Holmes. And finally, he will get another biopic when he stars as Theodore Roosevelt in Roosevelt. So the guy is as busy as ever, For the time being though, see what he would have looked like in Star Wars. It really would have worked. 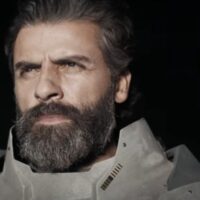