Knock At The Cabin: M. Night Shyamalan’s Next Movie

Let's take a look at everything we know about Knock at the Cabin, the next movie from M. Night Shyamalan coming next year.

When M. Night Shyamalan has a new movie coming out, it’s usually time to sit up and take some notice. After all, he’s been one of the truly creative, and suspense-building directors of our time. Has it all been great? No, of course not. No one has a perfect batting average with these kinds of things. But it’s been better than most with some of the more iconic reveals and ending twists that we’ve ever seen in the cinematic space. So when we hear that he’s coming out with Knock at the Cabin coming out next year, well, we need to find out what’s going on with this thing. Will it be typical M. Night Shyamalan fare or is he creating something different this time around? There’s quite a bit to dive into here.

Let’s take a look at everything we know about Knock at the Cabin, the next M. Night Shyamalan movie, its cast, the broad plot, release date, and much more.

WHAT IS KNOCK AT THE CABIN ABOUT?

As with most M. Night Shyamalan projects, the core plot had been mostly under wraps. The director has made a career keeping viewers guessing really up until the bitter end. And it was looking like this movie wouldn’t be any different along those lines. But recent news has come out that shed some on how the movie will shake out, or at least what we have for a broader concept.

The earliest log lines for the film have Knock at the Cabin had it taking place during an apocalyptic event. We didn’t know if this is a zombie-type thing, a killer virus, or some other form of how the world ends. It seems we had almost no shortage of possibilities where this is concerned. But while the end-of-days scenario has been handled many (many) times in the past, it stood to reason M. Night Shyamalan would give us a different look at this scenario.

For starters, though sometimes M. Night Shyamalan movies have had broader topics (ghosts, alien invasions, government experiments, superpowers), the stories are often much more insular. They are character driven with the viewer learning about the broader issue at hand in the same timeframe as those on screen. I think from this standpoint, we will get something similar here. And if the title, Knock at the Cabin, was any indication, we were looking at getting characters who are living remotely and just finding out about the world ending through a series of other events. That’s because it’s also being touted as a home invasion film. So we could be sitting on the edge of our seats wondering about this world on a micro and macro level.

Warning: Slight spoilers (maybe) for Knock at the Cabin coming up here.

But then this week it came out that M. Night Shyamalan actually adapted the screenplay from the book Cabin at the End of the World. In this book by Paul Tremblay, a couple takes their adopted daughter for a vacation in a secluded New Hampshire cabin. It’s there that a foursome of intruders take them captive and offer some very high stakes for what’s to come if their demands aren’t met. From the way the story shakes out, this M. Night Shyamalan movie could be spine-tingling with the broader implications around the world weighing heavy on everyone.

The Knock at the Cabin cast is a small one though has some clear talent here. David Bautista is in the lead and will mark another feather in his acting cap coming out of the Marvel Cinematic Universe. He’s made a point to join a number of different productions in the last couple of years, ones that have highlighted his considerable range as an actor.

Asked why David Bautista was put in the lead, M. Night Shyamalan told The Hollywood Reporter back in January that seeing the former in Blade Runner 2049 was the moment he knew who the Knock at the Cabin lead should be. M. Night Shyamalan said, “He was still in a way that was powerful…There’s a type of stillness where you’re not doing nothing; you’re doing everything and you’re still. Every cell in your body will do what it’s supposed to do if you’re thinking something correctly. And Dave was embodying all of this philosophy…”

This is strong praise for any actor. And remember, this was still when David Bautista was considering really just an MCU and action star. The broader range of films has only come very recently. He will be playing Leonard, the leader of the group who takes the couple hostage in the cabin.

WHO ELSE IS IN KNOCK AT THE CABIN?

Ben Aldridge and Jonathan Groff will play Eric and Andrew, the couple who’ve taken the vacation in the secluded cabin. In the novel, they have a young adopted daughter though it’s not clear if that part has been cast at this point or even added to the movie.

The rest of the home invasion crew along with David Bautista includes Rupert Grint as Redmond, Nikki Amuka-Bird as Adriane, and Abby Quinn as Sabrina. And that looks like it for the movie. Again, Knock at the Cabin is setting up like many other M. Night Shyamalan films in that the characters are few but the story is dripping with possibilities.

WHEN WILL KNOCK AT THE CABIN HIT THEATERS?

Filming for the movie wrapped up this past month and we are looking at only about six months until it hits theaters. Knock at the Cabin is scheduled for a February 3. 2023 release date.

For M. Night Shyamalan it will be a chance to get back into the positive side of the critical ledger. His last couple of movies Old and Split finished at 50% and 36% on Rotten Tomatoes, well below some of his previous work from earlier in his career. We will have more updates for Knock at the Cabin as they come out over the next few months and the release date gets closer. 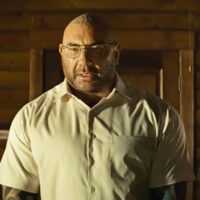 See The Tense First Video For M. Night Shyamalan’s Knock At The Cabin