Kevin Feige says most of the original Avengers lineup is gone from the MCU for good.

The Avengers from the Marvel Cinematic Universe, as fans knew them, have not been seen on screen since 2019’s Avengers: Endgame. That is to say, not all at the same time. Audiences have had some snippets over the last few years. Members of the Guardians of the Galaxy were featured alongside Chris Hemsworth‘s Thor in Thor: Love and Thunder, while Clint Barton had his own television miniseries on Disney+ — Hawkeye. Fans of the franchise have witnessed the origin story of Scarlett Johansson’s Natasha Romanoff in 2021’s Black Widow, which introduced the character of Yelena Belova, played by Florence Pugh. Now, it seems that MCU producer extraordinaire Kevin Feige has confirmed that The Avengers team may, in fact, be done with, making way for a new set of superheroes that will mimic the greatest crime-fighting team ever assembled.

According to a report by The Direct, Kevin Feige has gone on record to say that many of the characters that formed the original Avengers team have seen their last days within the MCU. At the D23 Expo over the weekend, Feige remarked that the upcoming film Thunderbolts will resemble the magic that The Avengers first introduced by having familiar faces join the team, possibly led by the new Captain America, Sam Wilson. Wilson is portrayed by Anthony Mackie, and Thunderbolts will star other MCU heavyweights like Sebastian Stan as Bucky Barnes, Wyatt Russell as John Walker, Florence Pugh as Yelena Belova, David Harbour as Alexei Shostakov, and Julia Louis-Dreyfus as Valentina Allegra de Fontaine. Many have appeared in other iterations of the franchise over the last few years, with Stan as one of the original members of the MCU family. While it isn’t clear if Mackie will appear in Thunderbolts, he will be a part of the new wave of Avengers films.

In the current climate that the MCU finds itself in, the team known as The Avengers does not really exist anymore. Tony Stark and Natasha Romanoff have since passed away, and while it’s never been confirmed, it seems likely Steve Rogers is also dead. Other members of the team like Hulk and Thor aren’t currently anywhere near Earth. Marvel Studios will be ushering in two more phases of their cinematic universe, flanked by two high-profile films to cap off Phase Six, Avengers: The Kang Dynasty and Avengers: Secret Wars. Mackie is set to play Captain America, taking over for Chris Evans who saw his character’s arc conclude in Avengers: Endgame. Since then, Mackie’s Sam Wilson has assumed the role and will wield the famous shield on the big screen.

The team known as The Avengers may not be available anymore to MCU fans in future projects, but Marvel will have time to assemble its newest teams for a new generation of fans. With filming yet to begin, Thunderbolts is slated to debut in theaters in July 2024 as part of the MCU Phase Five. Thunderbolts will conclude the phase after other films in the series may see familiar characters meet their end, including Paul Rudd’s Ant-Man in Ant-Man and the Wasp: Quantumania and Chris Pratt‘s Peter Quill in Guardians of the Galaxy Vol. 3. 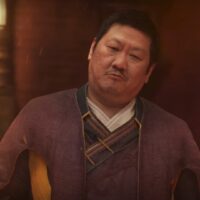