Kevin Costner delivered his worst ever performance in Robin Hood: Prince of Thieves, but didn't stop it from becoming a classic.

After over a decade in the proverbial Hollywood wilderness, Kevin Costner is back on top. Thanks to America’s deep love for Kevin Costner in a cowboy hat, he is currently starring in one of the most popular (and rapidly expanding) shows in the world and will be getting back in the director’s chair for the first time in years. At this point, Kevin Costner is a respected elder statesman of American cinema. He has two Academy Awards and a long resume of hit films, but he will never truly be able to live down one incredibly weird and bad role. Oddly enough, that truly terrible performance was the center of what has turned out to be one of his most iconic films: Robin Hood: Prince of Thieves.

Robin Hood: Prince of Thieves starred Kevin Costner as the title character. Or rather, he stars as Robin of Locksley, 12th century English nobleman who joined King Richard the Lionhearted in the Third Crusade. As the movie begins, he is imprisoned in Jerusalem and has grown a seriously metal beard, along with a number of other Englishmen and one Moor named Azeem (Morgan Freeman). After escaping prison, Kevin Costner and Morgan Freeman (who claims to owe him a life debt for freeing him on the way, though it seems like he equally saved Costner’s life by showing him how to escape the prison) make their way to England.

It turns out that the wicked Sheriff of Nottingham (Alan Rickman, who the studio allegedly had to edit around to prevent him from completely dominating the movie) is plotting to overthrow King Richard’s in absentia rule, though given that the King has basically left them in charge, it is unclear how this will change things for anyone. Kevin Costner finds his father murdered by Alan Rickman’s gang, meets badass noblewoman Maid Marian (Mary Elizabeth Mastrantonio), hooks up with some Sherwood Forest toughs, begins redistributing wealth from an Endor-like secret forest base, and eventually infiltrates Alan Rickman’s castle, kills him and his witch advisor, and King Richard returns in the form of Kevin Costner’s old Untouchables buddy, Sean Connery. Also, Christian Slater plays his half-brother, who really holds a grudge.

The legend of Robin Hood dates back to the 12th century and is not so much a coherent narrative as a collection of overlapping folk tales with some consistent elements. As such, there is absolutely no reason that Kevin Costner and his frenemy director Kevin Reynolds can not alter the story for any reason they want. Screenwriters Pen Densham and John Watson actually make the interesting decision to turn this Robin Hood into a spoiled rich kid who goes to war and finds himself regretting his past actions, which transforms into the whole “give to the poor” thing. This is undercut that we never actually get to see what Kevin Costner was like in the past, so we have to take everyone’s word that he has changed a lot, in a classic “tell, don’t show” scenario. Still, it is an interesting take that would no doubt be roundly attacked online as a “Woke Robin Hood” with a socialist liberal agenda, complete with a person of color shoehorned into the narrative and a single female character who is impossibly good and virtuous.

Of course, there is a certain chink in the narrative armor: Kevin Costner absolutely cannot do an English accent. This quickly became a running joke about Robin Hood: Prince of Thieves, which Mel Brooks’ parody Robin Hood: Men in Tights outright mocked just a few years later. Reportedly, the accent was just one of many things the Kevins clashed about, which results in multiple instances of Costner having an accent in one scene and then sounding like he grew up in Los Angeles the next. Sometimes it even happens in the same scene.

But it goes deeper than that; Kevin Costner is very much a creature of the 20th century. The ineffable qualities that made him the perfectly dorky dad in Field of Dreams and a morally upright district attorney in JFK make him impossible to picture in the middle ages. When you factor in his unintimidating physical presence as an action hero and the incongruity of everyone referring to the 36-year-old Kevin Costner as a “rich boy,” a lot doesn’t add up. However, that did not stop the movie from being a massive hit, having a kickass theme song, and continuing Kevin Costner’s miracle run of blockbusters in the 1990s. Soon, Waterworld would loom ahead, but at that moment, not even a terrible accent could stop Kevin Costner. 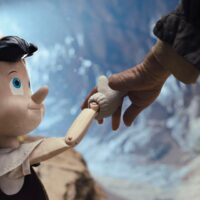