Keanu Reeves To Star In Jonah Hill’s Next Directorial Feature

Keanu Reeves will star in Outcome, the next film by director Jonah Hill.

Deadline reported that Keanu Reeves is set to star in the next directorial effort from Jonah Hill, titled Outcome. The script for Outcome was co-written by Hill with Ezra Woods and will be produced under Hill’s Strong Baby Banner. Plot details for the film are being kept under wraps for now and the film is set to hit the bidding market before the holidays, so expect major studios and streaming platforms to start vying for it.

Keanu Reeves will add Outcome to a busy project schedule that also includes the latest John Wick film John Wick: Chapter 4. For Jonah Hill, Outcome will be his second feature-length project as a director after his successful and critically lauded 2018 debut Mid90s. Hill recently had his documentary debut Stutz, which follows Hill and his therapist Phil Stutz as they have candid conversations about mental health and discuss Hill’s experiences with anxiety.

We only got one project from Keanu Reeves this year, as he voiced Batman in DC League of Super-Pets. Fortunately, we’ll get Reeves returning as one of his best characters when he returns as John Wick in John Wick: Chapter 4 which is set for a March 24, 2023 debut. The film will be directed by Chad Stahleski with a cast that includes Donnie Yen, Bill Skarsgard, Laurence Fishburne, Hiroyuki Sanada, Lance Reddick, Rina Sawayama, Scott Adkins, Ian McShane, Clancy Brown, and more.

Along with John Wick: Chapter 4, Keanu Reeves will be appearing in the John Wick spin-off Ballerina before appearing in Jonah Hill’s Outcome. Ballerina will star Ana de Armas as a young female assassin that seeks vengeance for the death of her family. The film is directed by Len Wiseman with a screenplay by frequent John-Wick universe scribe Shay Hatten and Promising Young Woman’s Emerald Fennel.

After Keanu Reeves is directed by Jonah Hill in Outcome, he’ll be appearing in yet another installation of the John Wick franchise in John Wick: Chapter 5. Reeves will also be returning to an underrated role of his when he once again plays DC’s John Constantine in Constantine 2. That film will be directed by Francis Lawrence with a script by Akiva Goldsman based on the DC comic book character.

As for Hill, the last time we saw him in an acting role was in 2021’s Oscar-nominated Don’t Look Up. While directing Keanu Reeves in Outcome will likely take up a lot of his time, we will get to see him act in a 2023 project called You People which he co-wrote with director Kenya Barris. The movie follows a new couple and their families and stars Hill along with Eddie Murphy, Julia Louis-Dreyfus, Lauren London, Sam Jay, Molly Gordon, Mike Epps, Nia Long, Deon Cole, Rhea Perlman, and David Duchovny. 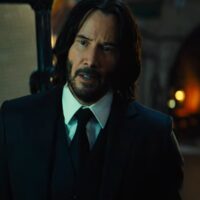