To most people, Jonathan Frakes is known for one thing and one thing only. He’s Captain Picard’s Number One, William Thomas Riker. For seven seasons, Frakes portrayed Riker on Star Trek: The Next Generation and while he didn’t completely disappear from the TV screen after, he found his true calling behind the camera.

JONATHAN FRAKES IS NUMBER ONE

It took Jonathan Frakes seven auditions over a six-week period to nail down his role as Will Riker on Star Trek: The Next Generation. As he mentioned in the book The Finest Crew in the Fleet: The Next Generation Cast On Screen and Off, “I started with the cattle call, then the casting director, the producer, then other directors, to Gene Roddenberry, and then through the Paramount execs, including the vice-president himself and the heads of television.” The process was long and arduous but well worth it. Frakes won the part and his life would never be the same, only not for the reasons you might think.

But it wasn’t his time in front of the camera that got his juices flowing. It was behind the camera that truly got Frakes excited. He told StarTrek.com, “I think I definitely made the right decision to pursue directing. It was actually one of the best decisions I ever made because I have another craft. I like it better, and I’m better at directing than acting.”

The Star Trek Directors’ School isn’t really a school, per say. That is just the unofficial title given to all the actors who appeared on the show and eventually went on to direct. Jonathan Frakes, for his part, was the official poster boy, being the first one to attend the “school.”

He said he knew from early on that directing was in is blood. “I think it happened very early in the first season. I had done a lot of guest spots, and I always was attracted to, admired, hung around, and watched, and I was curious about the directing position.”

Jonathan Frakes went on to explain that he’d kill a lot of time on set by watching how directors would set up scenes, discuss with actors on how to handle their parts, all stuff that Frakes had the desire to be part of. “That was interesting to me. I’ve always been kind of a set brat. In the beginning of season two I voiced an interest to Rick [Berman] about directing, and I could feel his eyes roll. He and I were friends, in addition to being working companions, and he said, “Well you know what? You’re gonna have to eventually train up. You don’t know anything about editing.” He comes from an editing background, from Big Blue Marble, when he was a producer and editor. So, the major change in my life was to get permission from, and endorsement of Berman.” Rick Berman was then the keeper of all things Star Trek.

He used that endorsement and found himself behind the camera for his very first directing gig. It was for an episode of Star Trek: The Next Generation called The Offspring and he felt that his persistence finally paid off. Jonathan Frakes explains, “I had finally, I think by virtue of persistence, broken Rick down. This was the middle of season three, so I’d been shadowing for almost two years. Patiently, consistently. The upside of all that was I was over-prepared, and the company was, for the most part, very much in support of my getting a shot to do this.”

But wanting something and the reality of it sometimes is not one and the same. Jonathan Frakes directed a few more episodes and was becoming more and more involved with the entire process, from the writing aspect and obviously the directing, but he was now beginning to jump into the editing room as well as the music being made for each episode.

Except for one day he just wasn’t in the mood. “One day, I wasn’t feeling it. I said to my wife, the beautiful and talented Genie Francis [of General Hospital fame], “You know what? I don’t feel like driving in today.” We were living in Tarzana then. She said, “You know what? The minute you start not showing up, it’ll give Rick an opportunity to say you’re really not interested.” So, I got my ass in the car and drove to Paramount.” Speaking of Genie Francis, Jonathan Frakes has been married to Genie for over 32 years and they’re still going strong. They met on the set of the nighttime soap opera Bare Essence and have since not left each other’s side.

Jonathan Frakes fell in love with directing. Not only did he get to direct more Star Trek, but he was also asked by Berman to helm two of the Star Trek feature films. Frakes got behind the camera for Star Trek: First Contact and Star Trek: Insurrection.

Jonathan Frakes told StarTrek.com about his collaboration with Berman on the Star Trek films. “Rick specifically changed my life by allowing me, and encouraging me, and supporting me as a director. When he chose me to do First Contact, we really got to make that together. Television, he was in the writer’s room and I was on the set. But when we were doing First Contact and Insurrection together, it was the best of creative times because we have a similar sensibility and a similar sense of humor, and we like the same kind of music.”

Frakes leaned into directing and moved away from acting. In total, Jonathan Frakes was behind the camera for 8 episodes of The Next Generation. He also found himself behind the lens for episodes of Star Trek: Deep Space Nine, Star Trek: Voyager, Star Trek: Discovery, and Star Trek: Picard. But those are just a few series he has worked on. Some of the more notable series Frakes has directed include Roswell, Leverage, Castle, NCIS: Los Angeles, Persons Unknown, Agents of S.H.I.E.L.D., The Librarians, and The Orville.

Jonathan Frakes hasn’t entirely given up acting though. For the most part, his acting gigs come more in the form of voice acting, as he has lent his voice to many animated fare. One of his better-known voice roles has been as David Xanatos in the animated series Gargoyles. He has also been heard on Adventure Time, The Super Hero Squad Show, Guardians of the Galaxy, and Miles from Tomorrowland. He also returned as Riker on the animated Star Trek: Lower Decks. That wouldn’t be the last time he’d return as Riker.

THE RETURN OF RIKER

“I was comfortable about halfway through the first day.” That was how Jonathan Frakes described his first day to Trekmovie on the set of Star Trek: Picard, returning to his role as Will Riker. But he also explained via Comicbook that he had a “major anxiety attack” before that comfort level set in. “I hadn’t acted in a long, long, long time. […] I hadn’t played Riker in 18 years, and I’ve been very fortunate to be busy directing. […] And I had a major anxiety attack because, for whatever reason, I’d forgotten to act. I forgot how to act. I was not a pretty picture for a few hours.”

Jonathan Frakes also said that knowing his Picard co-stars (Patrick Stewart and Marina Sirtis) had been in front of the camera more recently, he was nervous. “I had just directed two episodes of Picard with Sir Patrick and his acting muscle was well-toned. And Marina had just closed having starred in a play in the West End in London. So, I knew she was going to be in good form. So, I was a nervous wreck. It ended up going very well. But don’t let anybody tell you it’s like getting back on a bike. That’s bullshit.”

So, leave it up to his wife, Genie, to once again lend support. “Michael Chabon snuck me the script and I was in Maine and I was working on it every morning. And one morning Genie said, “Do you want me to run those with you?” And I said yeah so we started to run the lines and it was clear to me that I was woefully unprepared. Genie gave me the script back and said, “You better keep working on this.” [laughs] And I did, and it worked out fine.”

With Sirtis returning to her role as Riker’s wife, Deanna Troi, both are hoping there will be more of the two seen in Picard’s upcoming season 3. One thing we do know for sure: Jonathan Frakes will continue to be behind the camera for as long as Star Trek (or whatever series he can find) will have him. 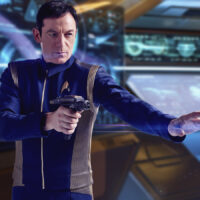