In the wake of Jon Watts stepping down from the director’s chair for the upcoming Fantastic Four movie, fans are throwing another choice out there for the job — John Krasinski. Though Krasinski has been a frequent fan cast for the role of Reed Richards (aka Mr. Fantastic), perhaps he could become part of the Marvel Cinematic Universe behind the scenes as well.

Frankly, this is one of those fan ideas that just seem like a natural fit. Not only would John Krasinski make a great Reed Richards, but he clearly has the directing chops to handle a Marvel property. His feature directorial debut A Quiet Place was a critically acclaimed hit for the horror genre and the sequel was well-liked as well. It seems like a better question would be, why not put Krasinski in charge of the Fantastic Four movie? Twitter is abuzz with the idea right now. Check out some of the Tweets below:

Some users may not be into the idea of John Krasinski as Reed Richards, but they would love for him to direct the film.

Some users are more explicit that they want John Krasinski involved in the project, in any way possible.

Some fans are even making their case as to why John Krasinski would be the perfect fit for the franchise.

One thing is certain: if John Krasinski does take on the directing job, he has some lofty expectations to live up to. The Fantastic Four has been notoriously difficult to bring to the screen, for one reason or another. Many fans will remember the last attempt going down in flames. The Jessica Alba and Chris Evans-starring versions didn’t go down a lot better. Fans have a lot of love for Marvel’s first family, so they’re really hoping that the Kevin Fiege and company can right the ship for their MCU debut. Maybe John Krasinski is the right man for the job.

In any case, Fantastic Four will move forward one way or another. Although there haven’t been casting announcements, it is as anticipated as any other MCU blockbuster out there. John Krasinski is undoubtedly at the top of the list for the Reed Richards candidates, but it remains to be seen if the MCU will take him there. Many fans are also hoping that his off-screen wife Emily Blunt will play his on-screen wife Sue Storm (aka the Invisible Woman). If that casting comes to fruition, the roles of Human Torch, The Thing, and of course Dr. Doom would still need to be filled. Although Dr. Doom isn’t confirmed to be the villain, one would assume that the famous Marvel foe would be introduced eventually.

If you’ve been campaigning for John Krasinski to play Reed Richards and direct Fantastic Four, now is the best possible chance for your dreams to come true. The MCU has usually been pretty good at making fans happy, so it wouldn’t be too surprising if this all pans out in their favor. 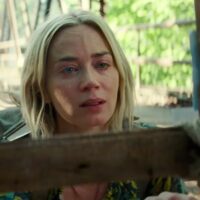