Jim Carrey’s Yes Man came at a point in his career where moviemaking was on a downswing. Thankfully, Yes Man holds enough Carrey comedy throughout, and also thankfully, Netflix has just added it to their streaming library.

Yes Man holds the familiarity of an earlier Jim Carrey hit Liar Liar. In this one, Carrey plays Carl, a bank loan officer who has seen his life go stagnant after the divorce from his wife Stephanie (Molly Sims). He becomes distant from his best friends Peter (a game Bradley Cooper) and Rooney (Danny Masterson) and his outlook on life have become quite negative. But an old colleague convinces Carl to go to a “Yes!” seminar where the speaker, inspiration guru Terrance, is on hand to convince the audience that “Yes” is the word they should be using. He even gets Carl to stand up and promise to answer “Yes” to every request, opportunity, or invitation presented to him.

So, in the vein of Jim Carrey’s Liar Liar, “yes” becomes the magic word. He first tries it out on a homeless man but ends up being stranded instead. Thinking that “yes” is not the way to go, he hikes to a nearby gas station where he meets Allison (played by Zooey Deschanel). She gives him a ride back to his car, ending it with a quick kiss. Feeling more optimistic, Carl heads home. As he arrives, Carl finds himself in a position where he has to turn down an offer of oral sex from his elderly neighbor. Carl also finds that saying no to her has its repercussions. He falls down his stairs and is nearly attacked by a dog. Understanding what “Yes” and “No” now mean to him, he goes back to his elderly neighbor and accepts her proposal. Life begins to change for Carl after that.

Carl begins to say “Yes” to everything. He mends his relationships with his friends, he builds his relationship with his boss, he helps Peter’s fiancé with her bridal shower, he takes Korean language lessons, and he learns to play the guitar after gaining a nice promotion at work. From these lessons, he stops a man from committing suicide and he reconnects with Allison.

Their relationship jumps on the fast track, and they find themselves at the airport looking to take the first plane out of town, no matter where it’s going. When they end up in Lincoln, Nebraska, things are going even better, until Allison asks Carl to move in with her. Carl is hesitant but finally agrees. As they get ready to fly back home, Carl and Allison are approached by the FBI and detained. Seems Carl has been profiled as a potential terrorist for all his recent accomplishments. Allison then finds out their relationship has been built on Carl saying “Yes” to everything, prompting her to leave him. Does Carl get the girl? He is called the “Yes” man for a reason.

Yes Man was not a critical success for Jim Carrey, though one shouldn’t be surprised. Over the years, critics haven’t taken kindly to the rubbery-faced Carrey and all his antics. But the main reason for their disapproval of this film was the simple fact it closely resembled his past hit Liar Liar. Fans, on the other hand, liked the movie to the tune of it making over $223 million at the box office. Not a bad take on a $70 million budget.

To say Jim Carrey’s career has been somewhat of a roller coaster would be a true understatement. Carrey has been on top of the world with hit films, but he has also seen the view from the bottom looking up. Too much success breeds contempt. Too much humor breeds discontent. Say what you will about the man now, but on more than one occasion during his acting career, Jim Carrey was the funniest man in the world. Of course, there will be those heroes out there claiming they’ve never liked Carrey nor his brand of humor. So be it. But box office numbers show differently. To date, Jim Carrey has brought in nearly $5 billion at the box office. Yes, man, that is billion with a “B”.

Before gaining fame on the over-the-top sketch comedy series In Living Color, Jim Carrey failed in three auditions for Lorne Michaels and Saturday Night Live. Even though he has been a recent guest-star addition with his semi-comedic take as Sleepy Joe Biden, SNL lost out on many wonderful Jim Carrey characters such as Vera De Milo, The Background Guy, Reverend Carl Pathos, and probably his most recognizable and famous, Fire Marshal Bill (Let me show you something!).

Jim Carrey turned his comedic gold into, well, more comedic gold when he found himself playing Ace Ventura, the eponymous Pet Detective. As with the famous television characters he created, Carrey began to do the same on the big screen. Along with Ace Ventura, Carrey became Stanley Ipkiss, Lloyd Christmas, Edward Nygma, The Cable Guy, Fletcher Reede, Truman Burbank, Andy Kaufman, Bruce Nolan, Count Olaf, and yes, even the Grinch. While you may not care for his brand of humor, you at least have to admit the man has been if anything, inventive.

Lately, though, Jim Carrey has stepped away from the Hollywood spotlight. Since going back to his Dumb and Dumber roots in the 2014 sequel, Carrey has found himself in front of the camera on only a few occasions. He has mainly allowed his talent to seep into other arenas, mainly painting. According to Carrey via The Hollywood Reporter, “I just didn’t want to be in the business anymore. I didn’t like what was happening, the corporations taking over and all that. And maybe it’s because I felt pulled toward a different type of creative outlet and I really liked the control of painting – of not having a committee in the way telling me what the idea must be to appeal to a four-quadrant whatever.”

Perhaps Jim Carrey has finally made his peace with Hollywood and it with him. He has returned, albeit sparingly, to both features, with a wonderful turn as Dr. Robotnik in the surprise hit movie Sonic the Hedgehog, and television by making noise as Joe Biden on SNL as well as playing Jeff Pickles in the Showtime hit Kidding. There are also rumblings that Jim Carrey may make a return to another of his famous characters as a Mask sequel is being discussed.

Like it or not, the world could use a bit more fun in it and the prescription may not be more cowbell, but more Jim Carrey. Let him show you something! 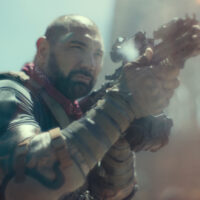 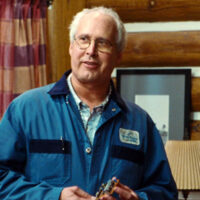