Jim Carrey isn’t cranking comedy movies (or really any movies) the way he used to back in the day. There was a time when the laughs came in a fast and furious manner from this dude, putting out bigger-budget flicks on the regular. Not all were hits, but nearly everything he did carried with it that Carrey charm and energy. It’s what made him one of the biggest on-screen stars we’ve ever seen and for a time he completely owned the town. Now there’s a relatively forgotten film about to hit Netflix that has all of the Carrey hallmarks in it. They just added Fun with Dick and Jane this week.

Fun with Dick and Jane carries with it many of the themes of the early 2000s, coming out in 2005 when folks might have started becoming disillusioned with suburban cookie-cutter complacency as well as seeing the increasing distrust of large-scale corporate fat cats. In this way, it’s a movie about the times and how the middle class was having a war waged on it by those sitting in ivory towers. Is this a bit of a heavy-handed way to describe a Jim Carrey comedy? Maybe, but it’s important to understand how the film positions itself and its story.

Jim Carrey and Tea Leoni live an idyllic suburban lifestyle in a prefab housing development and he’s got a mid-level job at a media company. Things are going pretty well when Carrey’s Dick Harper gets the promotion of a lifetime and his wife, aptly named Jane, can stay home to raise their son. The American dream right? Not so fast. Dick learns that his company is about to go under and that the big boss, Jack McAllister has made a killing on selling the company’s stock before everything went to zero. In this way, corporate greed acts as the primary antagonist and the reasoning for what happens next. Here, check out the trailer for Fun with Dick and Jane:

What do Jim Carrey and Tea Leoni do to solve the financial pickle they find themselves in after the company folds and the bills start mounting up? A life of crime of course. They start things small with low-level stick-ups of coffee shops and restaurants. But then they turn their attention to the corporate fatcat himself, opting to steal from him as a way to get “even”. In this way, their pursuit becomes a bit more “noble” if that at all realistic.

From a comedy standpoint, most of the movie’s laughs are mined out of Jim Carrey and his ability to command nearly every scene he’s in. Dick and Jane are woefully out of their element when it comes to armed robbery, something the film plays up time and time again as they get comfortable with their new endeavor. Carrey’s skills are on full display though and even though the film lacks much in the way of solid writing, he more than makes up for it with the sheer magnitude of his presence.

The cast for Fun with Dick and Jane is tops. Joining Jim Carrey and Tea Leoni is Alec Baldwin who plays the aforementioned Mcallister. He’s great in the role, totally believable as the smarmy and corrupt CEO who shills profits above all else. There’s also Richard Jenkins, Angie Harmon,

For a comedy film, Fun with Dick and Jane had a massive budget of $100 million dollars, a number you’d never (ever, ever) see doled out for this kind of premise anymore even if the talent was A-list. It did return a profit though, scoring over $200 million at the box office.

The critics were less forgiving though. The film was largely panned for its unimaginative story which came off almost as cookie-cutter as the house Jim Carrey and Tea Leoni are trying to keep from foreclosing on in the movie. It’s sitting at 29% Rotten Tomatoes and 47 on Metacritic. Again, there’s still plenty of laughs in here even if the story is lacking just a bit.

As for Jim Carrey, he has been taking it relatively easy of late, mostly sitting it out when it comes to on-screen roles. There are always rumors like him maybe teaming up with Ryan Reynolds for a superhero film or maybe getting a sequel to Eternal Sunshine of the Spotless Mind. But those are nothing more than little nuggets and nothing more. In the meantime, check out Fun with Dick and Jane if you want to see what the actor was bringing in the early-90s. 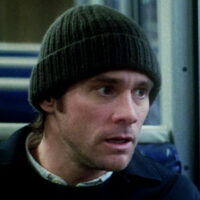 Jim Carrey To Be The Villain Of Deadpool 3?