Fans have given Jessica Chastain’s new spy thriller, The 355, an 82% score on Rotten Tomatoes. While this indicates that people are certainly liking the movie, only a select few have seen it. The movie has a stellar cast and a big name director attached to it. Low estimates for its opening weekend expected to see returns of $5 million to $7 million at the box office. The movie opened at 3,000 theaters nationwide and isn’t available on streaming yet, so these estimates were definitely conservative. However, The 355 is only looking like it will make $4.3 million during its opening weekend. This puts it behind Sing 2, which had already been in the theaters for a while and is now available on streaming. Spider-Man: No Way Home again took the first place position for a fourth week in a row.

While audiences on Rotten Tomatoes have reviewed the movie highly, critics weren’t into it. They’ve rated it a shockingly low 27%. Robert Ebert gave it only one star. Critics are saying that Jessica Chastain, Penelope Cruz, Lupita Nyong’o, Bingbing Fan, Sebastian Stan, and Diane Kruger were all big draws and gave great performances. However, they say that the story just wasn’t good. This is a harsh blow for writer and director Simon Kinberg. His last film was in 2019. Dark Phoenix was also critically hit hard and a box office flop.

This is a hard hit for Universal. The 355 is currently exclusively in movie theaters, where fans are still hooked on Spider-Man: No Way Home. Unversial will release the Jessica Chastain movie on streaming in under than three weeks, so there’s little hope of it picking up enough steam to not be a loss for the studio.

The 355 tells the story of top secret agents from around the world. They join forces to fight a bigger enemy. The trailer includes chase scenes, the Eiffel tower on fire, and tiny cameras hidden in jewelry to spy on people. Jessica Chastain plays Mace, who is at the center of the group of spies.

While actresses certainly have flops, this may be a particularly hard one for Jessica Chastain to swallow. She was a producer on the movie. She told Collider that she has a passion for female-led action films. If Jessica Chastain had her way, she’d be known as an action star. That’s the goal. She doesn’t want the movies to be funny either, she wants them to be seen and respected as action films. For The 355, they went out of the way to make the film owned by the actresses who starred in it. Their budget was small and they went outside of the traditional studio system to make it happen. They did their best to fund major stunts. In fact, one of the stunts, which involves the use of a crane, saw the actress hospitalized for injuries sustained on set, according to her interview.

Despite all of this effort from Jessica Chastain and those involved in the new Universal film, it may already be inevitable that The 355 will be a box office loss. The actress certainly isn’t hurting for work, though. She’s been in several recent projects, including The Eyes of Tammy Faye and Scenes From a Marriage. Hopefully she’ll be able to sign on for another action film soon, one that sees better box office success. 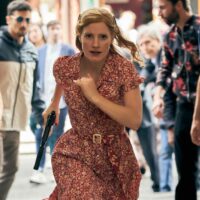