Over the last few weeks, Mayim Bialik has received a very warm welcome from viewers as the new host of Jeopardy! But not everyone is a fan. Former champion Arthur Chu has criticized the show’s producers for not respecting Alex Trebek’s wishes regarding his choice of successor. In an interview with Newsweek Chu said while he has no strong personal preferences on who gets the job, Trebek’s apparent choice of heir to the lectern has been overlooked.

“I was rooting for Ken Jennings as host out of solidarity as a fellow former contestant, and because it seems like he was Alex Trebek’s choice for a successor, hence Trebek giving him his cufflinks and having him narrate his audiobook,” Chu told the publication. “But ultimately most of what anyone would need to know to have an informed opinion is stuff that we’ll never find out about without someone leaking it from behind the scenes.”

Chu also admitted that he wasn’t particularly enthusiastic about the selection of Call Me Kat star Mayim Bialik helming the show, citing her past comments about vaccines, among other issues. “I find many of the comments Bialik has made about important issues in the past to be unfortunate and I strongly disagree with her past expressed opinions on issues like #MeToo and vaccinations.”

Chu’s comments add to the controversies the Mayim Bialik hosted talk show has been dealing with lately. Since the passing of longtime host Alex Trebek, Jeopardy! has been in a state of instability. At first, the series ran with various guest hosts. Eventually, ABC decided to name the show’s executive producer Mike Richards as the new permanent host. But this decision was met with backlash as old lawsuits called Richards’ character into question.

While Richards tried to deny the allegations, he was unable to separate himself from the scandal. On August 20th Richards stepped down from hosting duties, leaving the legendary series without a host once more. Fortunately, Jeopardy! soon revealed that Mayim Bialik and previous winner Ken Jennings will co-host the series until the end of 2021. Although the network probably wasn’t expecting her to be such a huge hit with viewers, Bialik has been the light in an otherwise dark situation.

Mayim Bialik is no stranger to television success. From 1991 to 1995, she starred as the title character of the NBC sitcom Blossom. Created by Don Reo the series followed Blossom Russo, a teenager living with her father and two elder brothers. From 2010 to 2019, she played neuroscientist Amy Farrah Fowler on the CBS sitcom The Big Bang Theory.

For her role, Mayim Bialik was nominated four times for the Primetime Emmy Award for Outstanding Supporting Actress in a Comedy Series. She eventually won the Critics’ Choice Television Award for Best Supporting Actress in a Comedy Series in 2015 and 2017. She currently stars in Call Me Kat as the titular character. The series, which is based on the British sitcom Miranda, has been renewed for a second season. 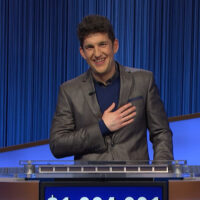