Apparently, last night’s crop of Jeopardy! contestants did not count among them any admirers of DC Comics. The contestants were given a clue that stumped them all — a fact that might make even the most casual of DC fans snort in contempt. The question would be a breeze for just about any fan of DC’s adaptations. The answer or, to make it Jeopardy! accurate, the question? “Who is John Constantine?”

The clue given to the Jeopardy! contestants was “On film, Keanu Reeves was this arcane artist that Matt Ryan played on DC’s Legends of Tomorrow.” It was too much for the Jeopardy! players, but just about any DC fan could tell you Keanu Reeves played the titular hero of 2005’s Constantine. Matt Ryan took up the role first for the NBC series of the same name that premiered in 2014. His solo series was short-lived, but he was ushered into CW’s Arrowverse in a 2015 episode of Arrow and from there Ryan eventually became a regular cast member of DC’s Legends of Tomorrow. You can see a tweet — from an excited DC fan — with the Constantine clue below.

While the fame of John Constantine may not reach the level of other DC properties like Superman or Batman, it’s genuinely surprising the Jeopardy! contestants were stumped, considering all of the obscure trivia — including from pop culture — they can often fire off without fail. He may not be a headliner, but Constantine is all over DC related media. Besides the comics, Keanu Reeves’ film, and Matt Ryan’s live-action appearances; the chain-smoking Brit makes regular appearances in animated DC features. Ryan has voiced the character for two Justice League Dark animated films, and is set to do so again in a little over a month in DC Showcase: Constantine — The House of Mystery.

Actually, you could make the argument this week’s Jeopardy! contestants had it easy. The number of actors playing Constantine is about to double in a relatively short amount of time. The upcoming Netflix series The Sandman will feature a gender-bent version. Jenna Coleman (Doctor Who) will play both the gender-bent Joanna Constantine in the present day, and her ancestor Lady Johanna Constantine. Meanwhile, there have been reports that the male version of the character will be recast for an unnamed actor of color, and Comic Book says this will be done as a part of the upcoming Justice League Dark project in development for HBO Max.

In the meantime, there are still those who hold out hope that Keanu Reeves could one day return to his own version of the character. And apparently Reeves counts himself among them. Constantine was not beloved by either critics or comic book fans when it first hit theaters. DC fans in particular were miffed at the many changes from the source material. Unlike Matt Ryan’s version, Reeves’ interpretation was neither English nor blond. He also had different powers, and many of the mystical items he used were much more Christian-themed than in the source material. The years have apparently been kind to the film however as more DC fans — none of them Jeopardy! contestants apparently — have given Constantine a second look and have campaigned for a follow-up. Reeves has said many times he’s tried to get a sequel off the ground, but so far it’s been a hard no from Hollywood. 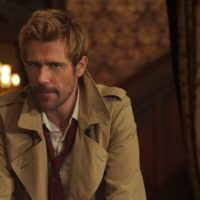